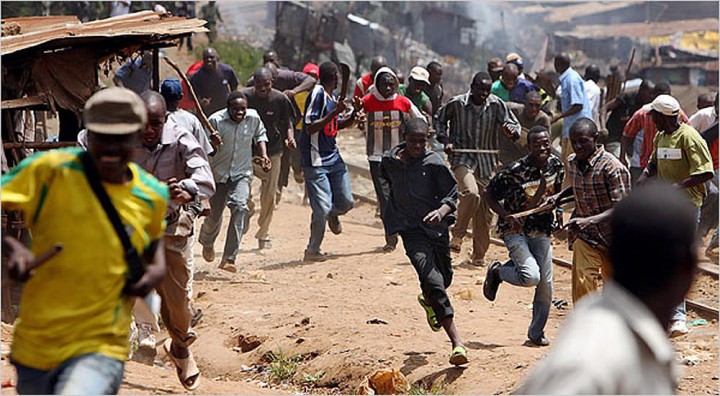 A exactly one week ago over 30 persons were killed by group of armed ‘Fulani herdsmen’ (who many say were Boko Haram) that attacked Koh, Taboungo, Ndikajam and Demsare settlement in Girei L.G.A of the state, although the death toll from the attacks have risen above 80, but the state government or any of its official yet to visit the affected community.

Anthony Chema one of the survivors of the attacks who has since returned to Koh, said  women and children have been asked to remain on the islands where they are taking refuge, for fear that their assailants may return.

Narrating their ordeals, Anthony said “the attacks appeared to have had the approval of key organs of government, noting that more than a week after the attacks no government official had visited their communities nor has any relief been brought, by aid agencies in the state, to cushion the deprivations being experienced by the victims.”

Is This Ethnic Cleansing By The Fulanis? – Villagers

He said, “These attacks have exposed the hypocrisy of the government. The state government and other organs of security in the state had turned their eyes the other way, so that our people will be maimed and cleansed by the Fulanis.

“But since that has failed, the state government refused to come to our aid nor has it bothered to see the extent of the destruction that caused by the attacks.”

Kpana Goron Chief Kef as Garkuwa the traditional head of the Bwatiye communities also decried the state government’s neglect, noting that the communities had continued to discover more dead bodies of missing persons with 46 additional corpses uncovered in the bush.

Stressing that the Bwatiye people and their Fulani brothers in the area have have co-existed for decades peacefully, despite recurring clashes between the farmers and the herdsmen, he however wondered why it would now be different, giving the scale of the destruction of lives and property unleashed in the mayhem he said.

Investigations revealed that since the attacks on Koh settlement and nearby Bwatiye villages of Taboungo, Ndikajam and Demsare, the state government appears undisturbed about the incidence, because no aid or relief has been given to the survivors of the attack which has claimed 86 lives.

Survivors, who complained of state government neglect in the face of the wanton destruction unleashed one week ago, have accused the government of ignoring them since no government official or any of the security agencies have visited the area.

Over 200 women and children displaced from the affected communities, taking refuge on the neighboring island adjoining Koh, Taboungo and Ndikajam are threatened by starvation since their food supplies were completely burnt down in the attacks.

Many of the victims, mostly women and children who have taken refuge on the island and are living outside in the open without shelter, say the absence of beddings and clothing’s which they left behind when they fled the attacks has caused most of the children to contract pneumonia as a result of cold.

Investigations also revealed that the Adamawa state Commissioner of Police CP Ghazzali Mohammed and his military counterpart in the state are yet to make any deployment of security personnel to the affected communities.

Youths in the affected communities can be seen wielding dangerous weapons as they patrol the town, women and children are still staying away in safe locations.

The district Head of Girei Dr. Ahmed Mustapha said the state Governor Sen. Mohammed Jibrilla Bindow, had assured them, after the security meeting convened by governor that relief materials will be taken to the victims of the attacks.

However, one of the victims Mrs Mavis Eliphas Ndikajam who said she lost her husband in the attacks, said they were yet to receive any form of assistance, adding that they have gone on for days without food.

“This is my fourth day, of going without food. We have also been sleeping in the bush for the fourth day running with my children. This clothe i have on me is the only one i had on when we fled the attacks with my children but their father wasn’t lucky as he was killed. We have no food to eat, we would like the government to come to our aid,” she said.

An eyes witness revealed that the deputy Government, Rt Hon. Marthins Babale with all the state relevant donor agencies have distributed some relief items in Hayin Gada, a settle in Girei LGA very close to the state capital meant for those attacked villages.

The eye witness said that “may be they had an intention of going to the communities but something else came up.”