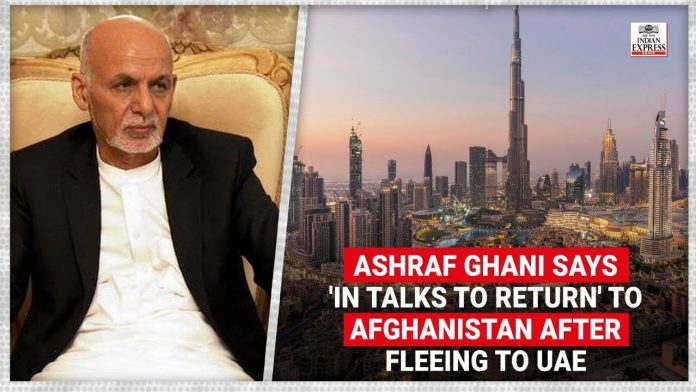 Afghanistan is showing the United Arab Emirates the downside of being a haven for deposed leaders and exiled politicians whose wealth is reportedly parked without question in Emirati financial institutions.

The latest arrival in the UAE, former Afghan president Ashraf Ghani, denied this week allegations by Afghanistan’s ambassador to Tajikistan, Zahir Aghbar, that he had stolen US$169 million from state coffers and an assertion by the Russian embassy in Kabul that he had fled with four cars and a helicopter full of cash. There was no independent confirmation of the allegations.

Mr. Ghani said after the UAE announced that it was hosting him for “humanitarian” reasons that he had left his country “with one set of traditional clothes, a vest and the sandals” he was wearing. “I was expelled from Afghanistan in such a way that I didn’t even get the chance to take my slippers off my feet and pull on my boots.” Mr. Ghani, a former World Bank official who co-authored a book entitled ‘Fixing Failed States,’ said he arrived in the UAE “empty-handed.”

Mr. Ghani was reported to have first gone to Tajikistan before landing in the UAE. Mr. Aghbar has denounced the Taliban takeover and pledged allegiance to Mr. Ghani’s first vice president, Amrullah Saleh. Mr. Saleh insists that he remains in office as the legitimate caretaker president and has criticized Mr. Ghani for abandoning Afghanistan.

Mr. Ghani joined a long list of high-profile figures who have sought refuge in the UAE over the years after having either headed governments that were perceived to be corrupt and/or faced charges of corruption themselves. They include siblings Thaksin Shinawatra and Yingluck Shinawatra, who both served as Thai prime ministers until they were toppled by the military, former Pakistani president Pervez Musharraf, former Spanish King Juan Carlos, ex-Palestinian security chief Mohammed Dahlan and Ahmed Ali Abdullah Saleh, the eldest son of a longtime Yemeni leader who was toppled in the 2011 popular Arab revolts and assassinated several years later.

“For almost two decades now, billions of dollars in corruption proceeds have been funnelled from Afghanistan, a country devastated by four decades of conflict, to Dubai. These outflows have played a part in stunting Afghanistan’s economic and political development, facilitating the resurgence of the Taliban, and exacerbating regional instability,” a report published last year by the Carnegie Endowment for International Peace concluded.

The Bureau of Investigative Journalism documented in 2019 ownership of luxury properties in Dubai by a host of prominent Afghans or their relatives. Among those identified by the Bureau were family of former presidents Hamid Karzai and Burhanuddin Rabbani; a presidential candidate, Ahmad Wali Massoud, whose brother was reported to have flown to the UAE with more than $50 million in cash; a senior intelligence official, Adib Ahmad Fahim, whose father was implicated in involvement with the transfer of large sums of money from Afghanistan, and various members of parliament. Mr. Fahim’s uncle, Haseen, and Mr. Karzai’s brother were shareholders in Kabul Bank, which was at the centre of a billion-dollar fraud in 2010, much of which was parked in Dubai banks.

The Bureau was careful to emphasize that ownership did not constitute evidence of corruption. The Bureau noted, however, that “concerns have been mounting generally about alleged corruption among some senior Afghan officials. Few, if any, of the properties appear to have been declared on official registers, as is required by Afghanistan’s often ignored and broadly ineffective anti-corruption rules.”

Maira Matini of Transparency International concurred at the time. “This doesn’t mean that those officials are corrupt. However, it does raise red flags and needs to be investigated by the authorities,” Ms. Matini said.

While in office, Mr. Ghani ordered an investigation into allegations of embezzlement by Ghulam Farooq Wardak, when he was education minister. Mr. Wardak was identified by the Bureau as owning together with his wife two luxury properties in Dubai.

The investigation, conducted by the US Special Inspector General for Afghanistan Reconstruction (SIGAR), reportedly found evidence of embezzlement and inaccurate data records on the number of schools that enabled diversion of donor funds. Mr. Wardak denied the allegations.

Of all the exiles in the UAE, Mr. Ghani most represents the risks of facilitating the movement of funds that potentially may have been acquired through corruption.

Massive corruption in Afghanistan is what partly returned the Taliban to power. If so, looking the other way at the influx of corrupt funds has helped empower the kind of group against which the UAE has been on the warpath for more than a decade: Islamists who reject a separation of politics and religion.

“Terrorist groups may use (Afghanistan) as a base if global powers cannot negotiate with the Taliban on (the transition of power) quickly,” warned columnist Yousef al-Sharif in the UAE’s Al Bayan newspaper.

To be sure, the Taliban have never sought to export their vision of an Islamic state but their victory encourages militants who do, many of which, like Al Qaeda and the Islamic State, are present in Afghanistan.

In addition to the fact that the Afghanistan debacle highlights the need for stricter implementation of anti-money laundering laws, the UAE may feel the need to review its policies as Western nations consider tightening their approach towards aid and cooperation with Middle Eastern, African and Asian countries in the wake of the return of the Taliban.

“The governments and populations we support need to assume ownership and responsibility for the well-being of their country. We need to apply conditionality much more than we have done in the past… If a host government does not play ball – if it is not ready to build strong independent institutions, promote democracy, fight corruption, and respect national and international law – in future, German leaders and their allies should think twice about entering into massive engagements,” said Christoph Heusgen, chairman of the Munich Security Conference Foundation Circle. Mr. Heusgen was Germany’s ambassador to the United Nations until June of this year.

Mr. Heusgen as well as Jean-Marie Guéhenno, a member of a board that advises US Secretary-General António Guterres on mediation, have suggested that Europe should review its involvement in other conflict zones such as the Central African Republic, Mali and Somalia.

The UAE has focused on Somalia and the breakaway republic of Somaliland with the creation of military bases and management of ports as part of its bid to project influence in the Horn of Africa and counter Turkey, Iran, Qatar and Saudi Arabia.