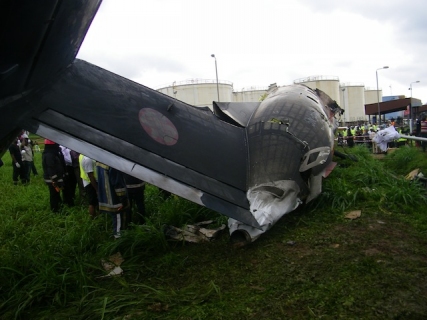 There appeared to be an argument between the Captain and the First Officer of the Associated Airline aircraft which crashed on 3 October in Lagos Nigeria and killed 15 people, the aircraft’s black box has revealed.

The readout of the black box, also known as Cockpit Voice Recorder, CVR, conducted by Nigeria’s Accident Investigation Bureau, AIB, in its Abuja’s laboratory revealed that the computer onboard the plane sent a warning message to the Captain, Yakubu Abdulrahman, shortly before take-off but he ignored it.

The First Officer then suggested to the pilot to abort take-off but Yakubu Abdulrahman proceeded and took off “The First Officer asked if the take-off should be aborted approximately 12 seconds after the ‘eight knots’ callout,” said Captain Mukhtar Usman, Commissioner Accident Investigation Bureau, AIB.

AIB said the pilot and the co-pilot discussed some concerns about the aircraft prior to departure.

“The crew discussed some concerns about the aircraft prior to departure but at this time we are not prepared to elaborate on those concerns as there remains a lot of work to do to complete on the CVR analysis in order to determine the specific nature of the crew’s concerns,” said AIB Commissioner, Muktar Usman.

Usman said approximately four seconds after engine power was advanced to commence the take-off roll, the crew received an automated warning from the onboard computer voice which consisted of three chimes followed by “take-off flaps…take-off flaps.

“This is a configuration warning that suggests that the flaps were not in correct position for take-off. And there is some evidence that the crew may have chosen not to use the flap for take-off,” Usman said.

“This warning continued throughout the take-off roll,” Usman added.

“Approximately three seconds after ‘power is set’ call, the First Officer noted that the aircraft was moving slowly.