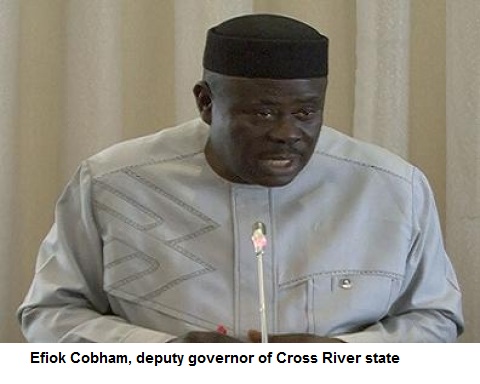 The Nigerian police has confirmed the abduction of Etubom Essien Cobham, the father of the deputy governor of Cross River state, Mr Efiok Cobham, by gunmen at his country home in Creek Town.

The Public Relations Officer of the Cross River State Police Command, Mr Hogan Bassey, confirmed the development while speaking with newsmen in Calabar.

He said: “For security reasons, I cannot tell you what we are doing to rescue him.

“The Commissioner of Police, Mr Kola Sodipo, and senior officers of the command have gone to Creek Town to see the building and the damage done.”

Eye-witnesses said the gunmen abducted the old man at about 2 a.m. on Friday in his residence at Creek Town in the Odukpani Local Government Area of the state.

Sources said that the deputy governor’s uncle, whose name was not immediately ascertained, was also abducted by the gunmen.

According to the sources in Creek Town, there was so much shooting while the operation lasted.

On the number of persons abducted across the state, Bassey said: “For now we are talking of the father. In due course we will give you details.”

On the incident at the residence of the Director-General of the State Security Service (NAN), Mr Ita Ekpenyong, he said the kidnappers could not gain access to Ekpenyong’s place.

Some reports said the kidnapers had initially burst into the residence of the brother of the SSS Director-General, but only succeeded in vandalising the building as the brother, identified as Chief Asuquo Aka, was not at home

The attackers were said to have been repelled upon getting to the home of the SSS DG himself.

Sources disclosed that the heavily armed abductors, accompanied by an Alsatian dog, came in through the Calabar creeks with two speed boats.

The incident, according to eye-witnesses, lasted for hours and took the community by surprise as the kidnappers fired gun shots indiscriminately to scare away any form of resistance before executing their act.

The attackers who were said to have entered Creek Town via the Bakassi Peninsula, came in two flying boats: “They broke the wall of the deputy governor’s father’s house to gain access to the building”, said
one source.