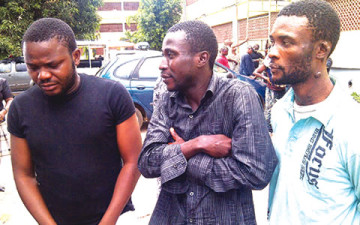 A university graduate and two other suspects were on Wednesday paraded by the Lagos State Police Command, following their arrest, by a tip off from a seven-year-old victim.

The graduate of Economics of Olabisi Onabanjo University, Gbenga Sholaja; Olalekan Benjamin and Samson Shomorin, who specialise in kidnapping little boys, were arrested by men of the Igando Police Division and the Special Anti-Robbery Squad, Ikeja, Lagos.

The victim (name withheld) was said to have been held hostage at Benjamin’s father’s house at Ikotun, Lagos.

The child, who was later released after ransom was paid by his parents, was said to have memorised the house address where he was kept. It was the child who led police officers to the same house where Benjamin was arrested.

Sholaja, who wept profusely during his interview, told PUNCH Metro that he was pushed by unemployment into kidnapping. He said, “I have a Second Class Upper (Division) in Accounting and have completed my National Youth Service Corps programme.

“I went into kidnapping because since I finished my NYSC in 2011, I have been unable to get a job.”

An ex-convict, who was remanded in prison for kidnapping three years ago, Benjamin, said he met Sholaja at OOU while he was trying to gain admission into the school.

He said, “I was a casual worker at a factory in 2007 before I was sacked; I earned N300 per day. After staying idle for some months, I met a friend, Muyiwa, we were carriers of frozen fish at Apapa. He introduced me to Taofeeq.

“One day, Taofeeq brought a small boy to my house and asked me to take care of him. He claimed that the boy was his younger brother; he was about seven years old. The boy stayed in my house with my family and was well taken care of for four days. Taofeeq even sent money for his upkeep.

“When Taofeeq went to collect N150, 000 ransom, he was arrested by SARS and he led them to my house. We were charged and sent to prison in November 2009. In September 2010, we were released because the complainant refused to show up in court.”

Benajmin and his wife, upon his release, then moved to his father’s house at Ikotun area of the state. In 2010, he was said to have met Sholaja in OOU, where he went to write the post-Unified Tertiary Matriculation Examination.

The 30-year-old claimed that Sholaja invited him to take part in another kidnapping; he said Sholaja had read about Benjamin’s arrest in the newspapers.

Benjamin said, “We would kidnap one boy and we would keep the boy in his (Sholaja’) mother’s house at Owode Ijako.

Describing their modus operandi, Benajmin said they usually kidnapped children while on their way to or from school. All suspects were said to have collected a total of N260,000 on two separate occasions, to secure the release of two boys.

Benjamin told PUNCH Metro that he befriended potential victims by buying them biscuits on their way to school, thereby earning their trust.

He said, “It was the last kidnap that got us into trouble. I drove away not knowing that the boy memorised my father’s house address, where he was kept.

“After he was released, he led policemen to the house and I was arrested along with my dad but my dad was later released on bail.”

Shomorin, on his part, confessed to kidnapping three boys. He urged the government to pardon them, promising not to go back to crime.

Ozoani said, “They confessed to have kidnapped three children -one from Omole Phase 1; one Kola at Alagbado area and the last one in Owode Ijako, Ogun State, and various amounts of money were collected as ransom.” – Punch