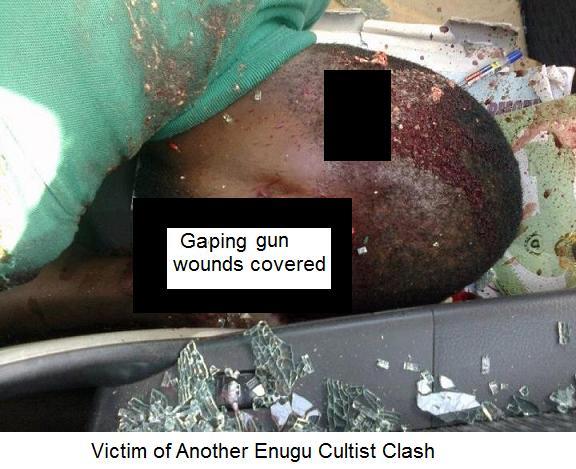 A cult kingpin, identified as Mba Chukwuemeka, aka, Don Titi, who confessed to be the head of Vikings confraternity has been arrested in Ngwo town, outskirts, Enugu metropolis.

The notorious cultist was arrested by operatives of the Special Anti Robbery Squad(SARS) of the Enugu state command of the Nigeria Police following a painstaking surveillance report which revealed his hideout.

The Police dropped the net on the ring leader at about 7.15 pm on 8th October and is presently assisting the command with useful information preparatory to his prosecution.

In a related development,operatives of the Nsukka division of the Nigeria police Enugu state command has nabbed one Uchola Godwin who claimed to hail from Obale Ibagi, Kogi state for allegedly being in possession of firearm unlawfully.

Suspect was apprehended by the eagle-eye operatives on stop and search duty at Okpuje along Nsukka-Odolu, Kogi road on 30/9/13 with a locally made pistol and three live cartridges.

He is also helping the police in their investigations.
‬
In a statement signed and made available to newsmen yesterday in Enugu, the Police Public Relations Officer,PPRO,of Enugu state command, Mr. Ebere Amarizu, urged,”members of the public to be vigilante of suspicious characters in their precincts and avail themselves of the phone numbers made available by the command to disclose useful information that will assist security agencies tackle crime and criminality in the state”.  Read on 247Ureports (WARNING: Unedited raw picture with gaping wounds!)