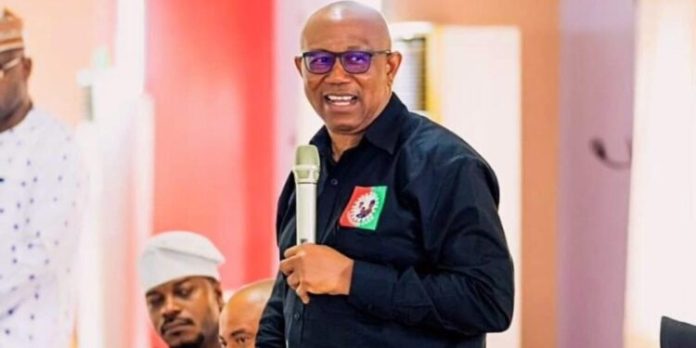 According to a new poll commissioned by the ANAP Foundation, Peter Obi of the Labour Party is still expected to win Nigeria’s presidential election in 2023.

Mr Obi has a huge lead in the nationwide election, with Bola Tinubu of the All Progressives Congress (APC) and Atiku Abubakar of the Peoples Democratic Party (PDP) trailing him.

“Mr Peter Obi’s 10% point advantage at this stage is considerable, but not enough to separate him from a leading pack of candidates scoring 13%, 10%, and 2%,” said Atedo Peterside, president and founder of the ANAP foundation.

“Undecided voters and those who prefer not to reveal their favored candidate total an astounding 29% and 23%, respectively. The gender breakdown of uncertain voters suggests that 38% of women are indecisive compared to 21% of male voters.”

As of December, the percentage of registered voters or voters with a permanent voter’s card was 90% in the North East, 89% in the South West, and 88% in the South-South. According to the survey, the North Central had the highest voter registration percentage at 87%, followed by the North West at 86% and the South East at 84%.

“The number of people refusing to reveal the identity of their preferred candidate has risen substantially from 15% to 23%, making it difficult for us to determine whether any of the contenders has gained considerable momentum between September and December 2023,” Mr Peterside said in a statement.

In September, the foundation commissioned a poll that predicted Mr Obi would win the election, with Mr Tinubu and Mr Abubakar finishing second and third, respectively.

When asked if religion would impact respondents’ selections, data gathered showed that 15% of respondents reacted in the affirmative to religion affecting their choice of candidates, while 81% responded that religion had no influence on their choices, according to the research.

Overall, 71% of respondents thought presidential candidates should be required to participate in a televised debate and/or town hall meeting, with the debates/town hall meetings covering themes such as manifestos, competence tests, and personality recognition, among others.

The proportion of respondents who intend to vote in the upcoming election varies by age group. For example, 73% of people aged 18 to 25 planned to vote in February, while 82% of registered voters aged 26 to 35 stated they planned to vote.

The age groups with the greatest willingness to vote were those aged 36-45 and 46-60.

According to the study, 8 out of 10 registered voters are positive they will vote in the next presidential election.

“If they stay dedicated, we could see a massive participation in the February Presidential elections in 2023,” Mr Peterside added.

“While this poll result shows some major tendencies, it is important to note that the struggle ahead is in the hands of undecided/swing voters, who will eventually decide whether candidate takes the lead to emerge as the President of the Federal Republic of Nigeria in the 2023 presidential elections.”

According to the researchers, the survey was performed “from 1,000 respondents; after which Anap Foundation conducted similar polls with a sample size of 2,000 and 3,000 respondents, the difference in the results was not significant.”

“Historically, an extremely high percentage of voters refusing to identify their favorite candidate has been linked to perceptions/fears (actual or imagined) of prospective voter intimidation within a geographical area.”

“Our December 2022 Polls are inconclusive in terms of establishing a clear winner since undecided voters paired with voters who declined to divulge their choices are enough to turn the tables,” the Anap foundation noted.

“However, Anap Foundation has judged that the trends are clear enough to identify the front-runners, thus our subsequent polls will continue to focus solely on the four leading candidates.”