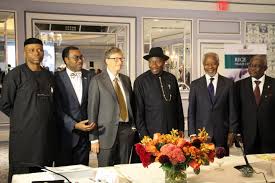 Every day we read a news broadcast about ‘transformation’ of the Nigeria’s agriculture sector. Veritably, the Minister of Agriculture, Dr. Akinwumi Adesina is investing generously in publicity of this ‘transformation agenda.’ However the daunting question is – how is any meaningful transformation of the nation’s agriculture sector possible when the farmers are an endangered species? In the news every single day dozens of our farmers in the farming belt, from Benue to Borno are massacred deliberately by Boko Haram terrorists. Up to 80,000 farmers have been killed since this administration took office in 2011 and according to the latest estimates; over 3 million have been displaced in the Boko Haram crises, these being mostly farmers and farming related professionals in the north.

As the Agriculture ministry taunts its ‘successes’ in dissemination of modified seeds, publicized to allegedly bring a revolution to the agriculture industry, it is difficult to understand why this ministry has not raised serious caution on the fate of the nation’s human farmers. The ministry has not made the threats to the farmers of Nigeria and directly to farming and food sufficiency, likewise a matter of serious public concern. Are there programs and initiatives the ministry under Dr. Akinwumi Adesina is taking to work with the farmers and nation’s security department to modify death determinants that affect this ministry more than any other? Protecting the life and farming environment of existing farmers is by all defines, the single most effective step in ensuring food security for the nation. The ministry of agriculture could play an essential role in initiating citizen measures to secure farming life in the farming belt. The ministry could also pressure the nation’s security department to act seriously toward protecting this industry. Seeds do not grow by themselves but require human farmers to plant and attend to them.

Currently the agriculture ministry is most forcefully pushing genetically modified seeds on the nation’s farmers with all types of incentives and subvert threats for non compliance. Nigerians as all informed citizens and farmers around the world are cautious of genetically modified seeds, GMO’s. There are too many credible reports of the destruction to the ecology that these seeds cause. In addition, food from these seeds and animals does not only not taste like real food, but also bears the potential to poison and cause cancer. As a further risk to farming, once planted one season, many of these seeds render the farm land unviable to any other type of seed thereafter thus causing a permanent dependence on the globalist big corp manufacturers of these seeds. GMO seed-use laws, and hybrid/patent sterilization, disallow the farmers from re-planting many of the seeds from the previous year’s harvest, thus forcing them to take crippling loans to purchase new seeds each season, leading eventually to a debt-ridden state of loan dependency and eventual decommissioning. This pattern of GMO decommissioning of indigenous farming, has repeated itself from Ghana to Europe to Haiti. The burning of donated Monsanto seeds by Haitian farmers after the 2010 earthquake shows how pissed off the Haitian farmers have become after realizing the dependency gimmick these modified seeds cause.

Many progressive nations around the world are banning these seeds, like “Golden rice,” and “WEMA,” genetically modified, patented seeds from Monsanto and the Bill Gates foundation, some of which are now being introduced to Nigeria. Nigeria’s ministry of agriculture would be well advised to re-focus on protecting farmers’ lives as against dissemination of potentially dangerous and human and ecologically poisonous, debt-dependency condemning seeds.