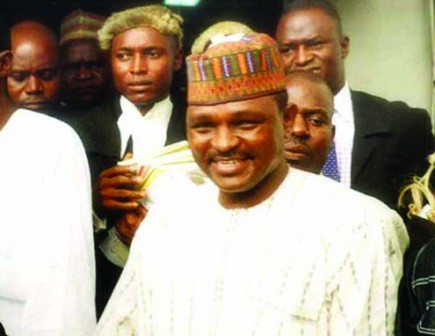 Maj. Hamza Al-Mustapha, the chief security officer of Nigeria’s tyrant, Sani Abacha, was on Friday released from the Kirikiri Maximum Prisons, Lagos, following his discharge and acquittal of a murder charge by the Court of Appeal .

The appellate court sitting in Lagos upturned a death sentence earlier passed on Al-Mustapha and Alhaji Lateef Sofolahan, an aide to the late Kudirat Abiola.

Al-Mustapha, a former Chief Security Officer (CSO) to the late Head of State, Gen. Sani Abacha, was sentenced to death on Jan. 30, over the alleged murder of the Kudirat, on June 4, 1996 in Lagos.

Kudirat was wife of the late business mogul and politician, Chief M.K.O. Abiola.

Al-Mustapha, who waved to well wishers that besieged the prison, said: “thank God, thank God,’’ as he was rushed into a jeep, which drove him away.

The former CSO was driven off in the same vehicle with Shofolahan.

Shofolahan had emerged five minutes ahead of Al-Mustapha, into the warm embrace of friends, who were also full of joy.

In a joyful mood, Sofolahan told the News Agency of Nigeria (NAN): “we are fine, we feel happy.’’

NAN reported that there was tight security as both men were released from prison.

Anxious family members and friends of Al-Mustapha and Shofolahan had earlier besieged the gates of the prisons ahead of their release.

The duo had been in detention since 1999 when they were charged to court. Al-Mustapha’s younger brother, Hadi, told NAN that he was overwhelmed by the judgment of the court.

At the appellate court, Justice Rita Pemu, who read the lead judgment, said that the prosecution totally failed to establish the charge of conspiracy and murder against Al-Mustapha and Shofolahan.