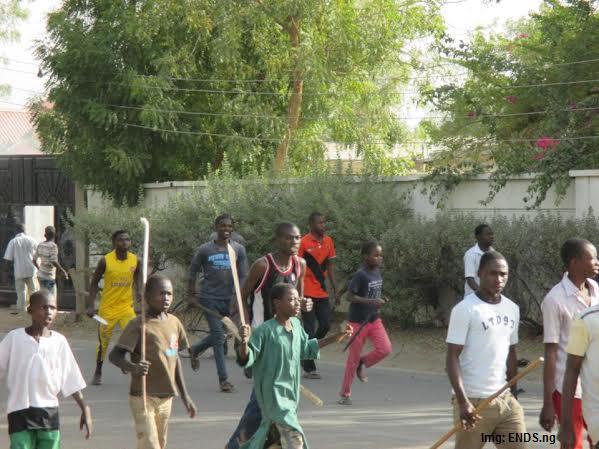 A little boy walking past the ruins in Gamboru-Ngala after Boko Haram attacked a public market killing some 300 people
By Saharareporters, New York

Two sources in the besieged community, which is near the Borno State capital, Maiduguri, told our local correspondent that the Islamist terrorists razed down all the houses in Alau, killed at least two persons, and wounded 18 people.

One source, Malam Adamu Ibn, said the Boko Haram militants could have killed more residents if a local vigilante had not mobilized quickly to fight back.

A security source told SaharaReporters that the Islamist terrorists arrived in the community on bikes and shot sporadically in the air, scaring resident, before embarking on their mission of setting homes on fire.

Alau, the scene of the attack, is about 15 kilometers from Maiduguri. The Kalabalge villagers on Tuesday repelled a Boko Haram attack killing about 100 of the insurgents and arresting about 10 of them.

The Nigerian government on Thursday commended residents of Kalabalge community in Borno State for repelling an attack by Boko Haram insurgents.

The Coordinator of the Joint Information Centre on Chibok girls, Mike Omeri, said that the residents’ actions showed that citizens are brazing to the antics of the insurgents.

Mr. Omeri also encouraged other communities to emulate this act by the people of Kalabalge.

He also assured Nigerians that the over 250 schoolgirls who were kidnapped from their dormitory in a Government Secondary School Chibok, Borno State, will be rescued.

Mr. Omeri said that Nigeria is working in synergy with the international community to reunite the girls with their families.

The Kalabalge villagers on Tuesday repelled a Boko Haram attack killing about 100 of the insurgents and arresting about 10 of them.

The insurgents had repeatedly attempted to attack Kalabalge, an agro-nomad community near the Cameroon borders, but failed to gain entry into the village on each attempt.

Residents said the villagers had made security preparations around the village that made it impossible for the Boko Haram insurgents to succeed. The village also serves as the headquarters of Kalabalge Local Government Area of Borno.

“We have told them (Boko Haram) that they cannot take their attacks to our village because, we have taken measures both security wise and spiritually to prevent them”, a vigilante member in the community who did not say his name had told PREMIUM TIMES on phone.

The residents of Kalabalge also recovered vehicles and ammunition from the insurgents.