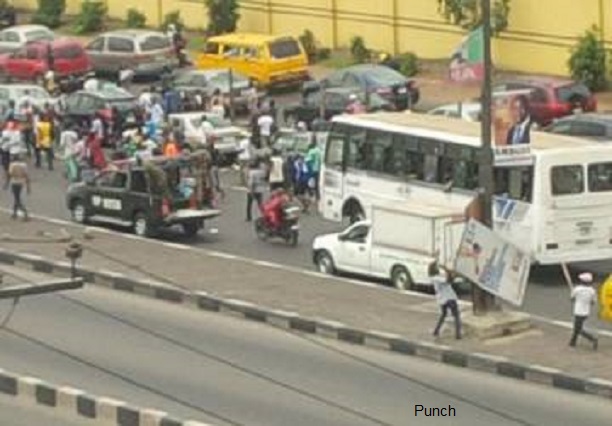 Odua People’s Congress, OPC terrorists armed with guns, machetes and other weapons and the Goodluck Jonathan Campaign organisation both blocked the Lagos-Ibadan expressway Monday “protesting” the Independent Electoral Commission, INEC chairman and non specific issues ahead of the election president Jonathan is by most analysis set to lose.

The thugs caused a traffic buildup on the expressway, the only access route from the north and west of Nigeria to Lagos.

The thugs and terrorists were heavily guarded by members of the nation’s police force under IGP Suleiman Abba.

The Jonathan government has been alleged to have paid $45 million a piece to the OPC terrorists in the western region, MASSOB in the east, and even more to Niger delta militant terrorists in the south south to cause chaos before and during the March 28 elections in hope of disrupting the process and forcing an Interim government that Jonathan, his wife and friends hope will save them from incarceration.