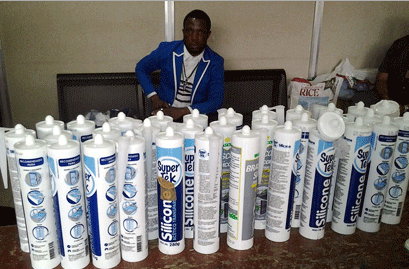 An Asaba based music producer, Micheal Okafor (pictured above) and three other Nigerians based in South Africa namely, Obi John Chukwuenyem, Gilbert Kelvin and Deborah Ifeoma, have been arrested by officials of the National Drug Law Enforcement Agency (NDLEA) for having in their possessions, banned drugs weighing 41.625 kilogrammes comprising 36.675kg of methamphetamine and 4.95 kilogrammes of cocaine with an estimated street value of over N374,625million.

When interrogated, some of the suspects said they were not aware the drugs were concealed in their goods. Obi John who lives in South Africa, said he ventured into the business so he could pay his children’s school fees, “I struggle to feed my family by selling foodstuff. Now, the business is near-moribund. A friend met me on my birthday and introduced me into drug trafficking. He promised to pay me 15,000 South Africa rand. My children are out of school because of my inability to pay tuition fee. This is the first time I would deal in drugs and I regret everything. I pray to be out of this problem” he said.

Gilbert, who claims to be into importation and exportation of phones and clothes, said he has five children from three women and has suffered major loses in his business

“My business is grounded and I now live from hand to mouth. My South African friend for over ten years gave me solar lamps where the drug was found. He used to assist me financially and he also promised to pay my children’s school fees.”

Deborah who is a mother of seven said, “I take care of my seven children from selling foodstuffs. I came to Nigeria to buy foodstuffs like melon, vegetables and other local spices. I approached a man in South Africa for financial assistance to enable me expand my business. He called me that somebody would give me some food items for him. When I got to the airport, NDLEA officers detected methamphetamine in the package given to me by the man. This was how I found myself in this situation”.

For the Asaba based musician who was coming into Nigeria from Brazil when he was apprehended, said he was not aware the hard substances were in a bag a friend gave him to deliver to someone in Nigeria.

“I am a music producer. I traveled to Brazil to promote my music label and to partner other producers. I had a successful deal but on my way back, I accepted a bag from a friend I met in Sao Paulo to take to Nigeria. When I got here, NDLEA demanded to search and 29 out of the 34 sealants were found to contain cocaine. This is a major setback for my career and I feel very bad.”