For years he has worked as a cemetery inspector in the north-eastern Nigerian city of Yola and also hunted wild animals, but now he has volunteered to join the battle against militant group Boko Haram.

It has waged a five-year insurgency to create an Islamic state, establishing bases along Nigeria’s border with Cameroon and Chad.

Mr Dawaki tells me just last week he fought alongside the Nigerian military close to the town of Mubi.

“I killed more than 10 of them and we could see some were Chadian. We could tell by the tribal marks on their faces,” he says.

He says his own weapons include a small knife that he used to slit the throat of one jihadist and a bow and arrow, as well as buffalo horns dipped in cobra poison.

“A knife cannot penetrate us. If bombs drop they cannot kill us,” Mr Dawaki says, pointing to a leather amulet on his arm and another around his neck containing verses from the Koran. 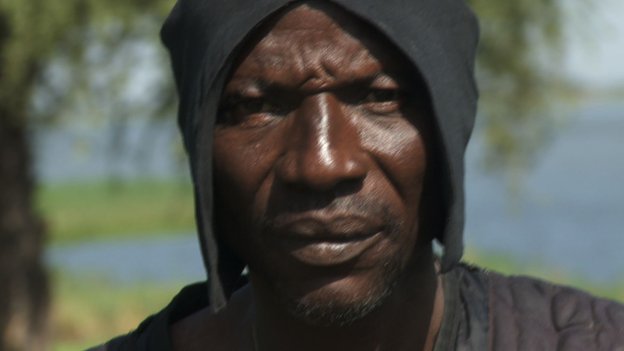 “When we are on the battlefront we are focused on the job – we are patriotic, we want to save people from Boko Haram attacks and avenge what they are doing to our people,” Tijjani Mohammed, a retired civil servant who just returned from fighting told me.

“We lost three of our men and seven were injured,” he says, adding that despite the losses, the mission against the insurgents had been a success.

Boko Haram fighters have been seizing towns and villages close to the Cameroonian border and when they attacked the town of Mubi just over a month ago, they met little resistance from the military.

“I just gathered my children and started running out of town,” says Zainabu Yusuf, whose husband was shot dead by the jihadists on the road in front of their home.

“While I was running I saw soldiers running too, asking the way out of the town to Maiha. They were removing their uniforms and hiding them in plastic bags.”

When the insurgents moved on to attack areas south of Mubi, panic spread and with people starting to flee the Adamawa state capital, Yola, the authorities had to act fast. 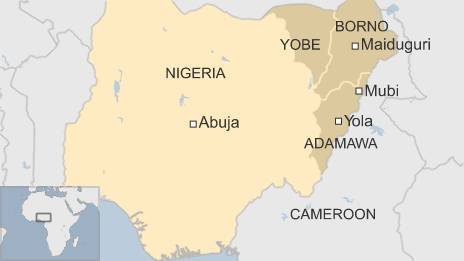 “These vigilante groups were already there but were dormant, so we organised them, bought them vehicles and empowered them,” Bala James Nggilari, the governor of Adamawa state, told the BBC.

“The vigilantes and hunters are local people, local boys who know the terrain. When you bring a soldier from Bayelsa [in southern Nigeria], for example, who is coming here for the first time he doesn’t know the terrain.

“The people we are fighting are also part of the local community. There is nothing on their forehead that says ‘insurgent’ but these local hunters are familiar with them, they know them, they have the native intelligence which the regular army may not have,” says Mr Nggilari.

He says the plan is to mobilise 4,000 vigilantes.

Co-operation with local vigilantes has reaped rewards as the military has now retaken several towns in the north of Adamawa state, including Mubi, and calm has returned to Yola.

Some of the men I met training in Yola were holding 2m long (6ft) rusty hunting rifles, others had machetes. They say they were promised about 4,000 naira ($22; £14) a day and that during a recent operation some of them were given assault rifles by soldiers.

Not all of them are being sent to the north of the state to assist the soldiers, with many getting ready in case they are needed to help defend Yola.

Over the past two years, vigilantes have had an impact against Boko Haram, especially in the capital of Borno state, Maiduguri. But sending them out on missions with the military is a new development. 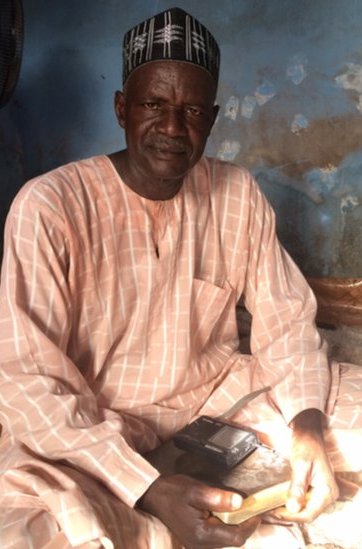 Some will view their deployment as a damning indictment of the Nigerian military, which has frequently failed to protect the population of north-east Nigeria.

The violence is still on a horrific scale but to the vulnerable and displaced, the alliance between soldiers and vigilantes brings hope.

Samson Dawa recently witnessed jihadists speeding through his village, Mbalala, on their way to capturing Chibok some 15km (9 miles) away.

“There were dozens of motorbikes and each one had two or three people on – all carrying guns,” he says. “The men on the open-backed 4×4 vehicles were shouting and had heavier guns which they were raising up.”

The 57-year-old farmer grabbed his radio and bible and ran for his life.

Two days later, from a safer village he saw a long convoy of vehicles ferrying soldiers and vigilantes, with amulets tied around their arms. They were heading towards Chibok, the town from which 219 schoolgirls were abducted in April.

“When we saw the soldiers we knew they were serious and we had hope in them,” says Mr Dawa. “Judging by the kind of weapons they had I think their strength has been improved.”

Within hours, Chibok was retaken. Many jihadists were reported to have been killed on the streets of the town.

“The vigilantes alone cannot do this job so if anybody tells you they have more hope in the hunters than the soldiers I don’t believe them,” says Mr Dawa.

Deploying the vigilantes is a desperate measure and shows the depth of the crisis in the north-east.

But it could be the key to helping the military stop the jihadists from holding territory.

“You know it’s a war. Maybe I will be back or maybe I will not be back,” says Mr Dawaki as he prepares to return to the fight.

“But even my children would be proud to say their father died fighting Boko Haram.”