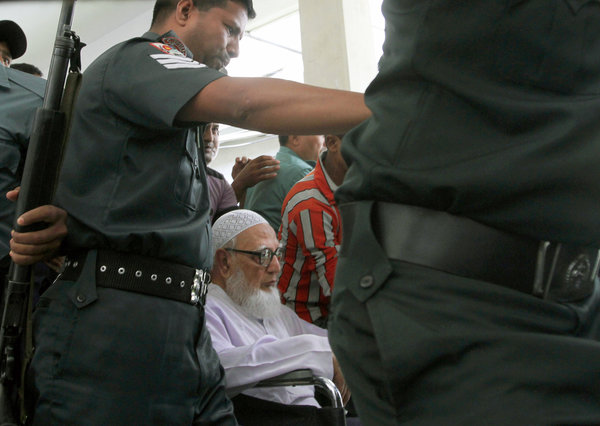 At least five people have been killed in protest against a jail term given to Bangladeshi former opposition leader.

NEW DELHI — A Bangladesh war crimes tribunal on Monday sentenced a 91-year-old former Islamic party leader to 90 years in jail for crimes committed during the country’s 1971 war for independence.

Ghulam Azam, the former leader of the Jamaat-e-Islami party, was convicted on all five major counts against him, including murder, conspiracy and incitement and complicity to commit genocide. They concluded that the death penalty was appropriate for the charges but commuted that sentence to what is effectively life in prison.

Mr. Azam, who was arrested in January 2012, was the third Islamist leader to be convicted in recent months for collaborating with the Pakistani authorities during the 1971 war in which as many as three million people died and millions more became refugees. Several more such verdicts are expected in the coming months.

The trials, part of a long delayed reckoning with Bangladesh’s birth, have led to violent strikes and deep unrest in Bangladesh that has pitted youthful progressives who have demanded death sentences for the Islamist leaders against members of Jamaat-e-Islami. Mr. Azam led the party until 2000.

Both sides called strikes that have paralyzed the country and hurt its economy, which was already reeling from disasters that have struck its all-important textile industry.

Jamaat-e-Islami called for a strike Monday in advance of the verdict, and at least one person was beaten to death by political activists for failing to heed the strike call, according to local media reports.

Atiq Rahman, executive director of the Bangladesh Center for Advanced Studies, said that both sides were dissatisfied with the verdict on Monday but that he did not expect the same level of violence that followed previous sentencings.

“Neither side got what they wanted,” Mr. Rahman said.

Mr. Azam’s lawyers said they would appeal, claiming that some of the documents submitted to the court were forged.