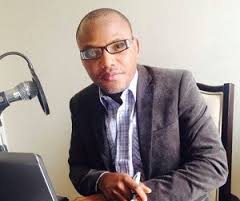 We have seen this before. This is how Boko Haram started. This is how MEND started. But this may be potentially much worse. We have a terror leader freely utilizing modern media tools comfortably for way too long; sowing seeds of terrorism and death into the hearts of vulnerable Nigerian youth embittered after 30 years of PDP and the party founders’ plundering and destruction of Nigeria.

Listening to the publicly available archives from the past few days of the Radio Biafra show, since the deadly “shootout” at Onitsha on Sunday August 30th, one hears only the drums of war, or rather terror.

A caller calls-in and tells megalomaniacal Nnamdi Kanu, the radio host that he is ready to kill soldiers and their families. Another, Chinwendu calls-in from Abuja and tells the host that what he should do is give the order for Igbos in the Igbo states to start killing Hausa-Fulanis as a covert action; that this will precipitate a revenge in Nigeria (the zoo as they call it on the show) where the caller currently resides. The caller explains that “when they start killing us here it will cause the nation to erupt in chaos and this will make Igbos return to “Biafra-land.””

It is the type of chaos that has happened in Nigeria’s past and that some have suspected was triggered by Biafra zionists for the same reason–to push Igbos out of the rest of the country so they can fight for the secession from home. Even other terror in Nigeria has been suspected to be fueled by such mischievous persons with mission to cause chaos and trigger ethnic pogroms, Igbo exodus and a possible hate built secession.

Chukwuemeka Onyebuchi calls from Malaysia and discusses with host Nnamdi Kanu how they should be killing Nigerians one-for-one. “Blood to blood, fire to fire.” He asks them to start a secret strategic plan off the air waves.

Another Biafra zionist calls the host and tells him that he is technically trained and has been researching how to make deadly weapons for the past 20 years. He, a technician and engineering graduate says he can make microwave lasers that can destroy armored tanks. He says he has a host of other deadly friends who are all ready to wage war against Nigeria.

In the chilling audio recording of September 1st, a certain Uchechukwu Madueke in London’s Heathrow calls-in and tells Nnamdi that his brother who “spoke to Nnamdi yesterday” has left India for Nigeria and has promised to kill a random Hausa man. The caller who hails from Enugu says he knows his brother, Michael, that he will kill the Hausa person before he returns to India.

Listen to chilling clips from the broadcasts:

Nnamdi Kano continues to promote and promise these radio Biafran fanatics that he will meet them in secret as he travels the world and that soon they will “avenge” the deaths of “Biafrans.” Kanu says he will kill Nigerian soldiers for what they have done and “trigger the collapse of the Nigeria, ‘zoo'”. Nnamdi Kanu, the radio host freely travels around the world and incites Igbo youth against the Nigerian state.

Radio Biafra is live on short wave, on the internet and on phone Apps. The march in Onitsha on August 30th that turned deadly had hundreds of “Indigenous People of Biafra,” IPOB, participants. With the unscrupulous covert plans of Biafran zionists, it is highly plausible the protesters intentionally fired shots to trigger the chaos and deaths the group appears to desperately seek under the new government. It can be recalled Radio Biafra was in support of the Jonathan government and the former army chief, General Azubuike Ihejirika who has been accused of diverting army billions (USD) and allowed Boko Haram devastate the north of Nigeria.

It can also be recollected that the Oslo Norway terrorist, Anders Breivik in his manifesto detailed his support for pro-Biafran zionists. This Radio Biafra group may be more complicated and deadly than meets the eye.

In the past we have accused Nigeria’s former Chiefs of Security, NSA Aliyu Gusau and NSA Sambo Dasuki for deliberately ignoring the signs of Boko Haram and MEND and allowing these terror groups to establish and fester. We believe the current NSA is tuned in to the radio station and the nation’s intelligence department is tracking all these potential terrorists.

Radio Biafra must immediately be declared a terror organisation. The radio host must be internationally declared wanted for Interpol to arrest him. The Radio Biafra phenomenon cannot happen in any other country and it should not happen in ours. While the incident of August 30th must be investigated and justice must be served to all erring parties, this unfortunate event is not a reason for a declaration of terror on a sovereign nation, except by a lunatic mind who was hoping for and promoting such tragedy. Indeed Nnamdi Kanu aligned with Shekau in his September 1st broadcast, saying Boko Haram started out peacefully and that it was the Nigerian state that provoked them to arms as they have now provoked Radio Biafra.

The true grievances of Nigeria’s Igbos must be addressed in reasonable fashion including options for regionalism if intellectual referendum proves the true desire, however the unscrupulous young terrorists and terror minded bad eggs must not be condoned. We must not wait once again till the bombs start exploding uncontrollably in the East before we act. We trust President Buhari to handle this, perhaps first greatest test effectively and exigently.

#REACTIONS: Igbos Are The Worst Deterrants Of ...