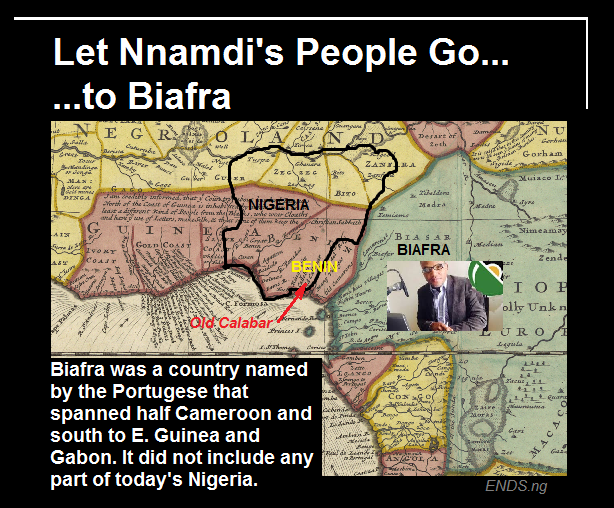 The pirate radio Biafra has confirmed that the United Kingdom has refused to accept it’s request for intervention and support over the alleged detention of its director Nnamdi Kanu by the Nigeria’s secret police popularly known as the
State Security Service (DSS). With this development, the illegal association of misguided and ignorant Igbos that describes itself as the Indigenous People of Biafra (IPOB) must have known that they are on their own as no member of the international community will romance a group of touts that delight in insulting a sovereign nation and its government in the name of freedom fighting.

As the United Kingdom clearly stated in its response to IPOB request, there is no evidence of persecution of the Igbo by Nigeria since the end of the civil war as usually claimed by the Biafra agitators.

The truth remains that the Biafran nation that was forcefully designed and declared by late Dim Chukwuemeka Odimegwu Ojukwu in 1967 died a natural death after Ojukwu escaped and handed over to Phillip Effiong who consequently, surrendered to the Nigerian army led by Gen. Olusegun Obasanjo in 1970. After that, the sovereignty of Nigeria was solidified and sustained thereby bringing an end to the 3 year old nation called Biafra.

Moreover, Ojukwu confirmed his loyalty to the federal republic of Nigeria by contesting for the office of the president in Nigeria’s presidential election in 2003 and I’m sure that if he is alive, he will disown Nnamdi Kanu and his group of fraudsters.

Also, I am yet to see a genuine reason why a dead and buried nation (Biafra) should be advocated for. This is because the Igbo which the fraudsters that call themselves IPOB always claim to speak for enjoy the greatest level of hospitality in Nigeria. There is no part of the country that you won’t see a successful Igbo man that was encouraged by the hospitality of his or her host community.

Hausas and Yorubas freely sell land and properties to Igbos and encourage them to set up various businesses in their communities and I doubt if an Igbo man in the southeast can freely sell his land or properties to Hausa or Yoruba indigenes or encourage them to set up businesses in Igbo land but yet the Igbo will always cry of being marginalised while they champion it most through baseless tribal sentiments.

Furthermore, there is no sensitive office or institution that has not been headed by an Igbo since the end of the civil war despite the fact that they are the defeated tribe in the war.

The only position that an Igbo has not occupied is the office of the president. However, to attain that height, you must collaborate with other tribes which the Igbo always fail to do rather they will be insulting others whose supports are required for their victory at the presidential poll. With such careless attitude of Igbos, it is safe to believe that they are the one holding themselves from winning the presidential election and not Nigeria.

I decided to ask some strict fans of the fraud called Biafra why they want to secede. Funny enough, non of them could give a reason but only said that Nigeria is a zoo as their director Nnamdi Kanu used to say.

Also, it is laughable that these misguided folks do not know the history of what they are agitating for. They only believe the lies of Nnamdi Kanu who always tell them that Biafra is older than Nigeria. They failed to understand that there is nothing like Biafra in the pre-colonial days but the nation was hurriedly designed by Ojukwu and
declared in 1967 without the consent of the Niger-Deltans thereby forcing them into a forced marriage that led to the untimely deaths of their brothers who were massacred by the Biafran soldiers during the war. That is why a true
indigene of the Niger-Delta hates anything Biafra with passion.

Nnamdi Kanu used to tell these misguided folks the false sides of the civil war history thereby making it look as if the Igbos were the only victims of genocide while they are also perpetrators of same genocide through the invasion of the Niger-Delta by Biafran soldiers. The truth is that the Nigerian army never entered most parts of today’s Niger-Delta region but the Biafran soldiers did. Yes! The Biafran soldiers invaded the Niger-Delta and massacred many of its indigenes and forcefully changed the community names of many parts of the region to Igbo and even forced the indigenes to answer Igbo names. This is pure wickedness but Nnamdi Kanu and pirate radio Biafra will never say such but they will rather turn history upside down. Do they think that the international community is made up of morons and fools?

The good news I have for these fraudsters that use the dead Biafra to defraud misinformed Igbos is that if their deceiver-general is truly under the custody of DSS, no world power will intervene for his release and he will rot in jail because his acts amounts to treason which is a taboo and a criminal act. Even Israel that the fraudsters claim to be its blood relatives first disowned them by selling their satellite to the Nigerian government as the pirate radio station confirmed.

As the United Kingdom has denied the fraudsters (IPOB) attention, the United States, Germany, China, Israel and Russia will soon do same and if they like they can create more fake social media profiles with the intention of impersonating the world leaders in order to deceive their misinformed followers. The United Nations is a disciplined organization and cannot entertain requests from touts and criminals. Nigeria has come to stay!