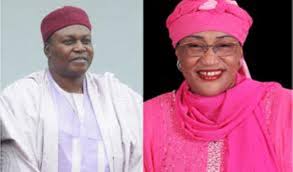 The decision of the Taraba State Governorship Election Tribunal delivered on Saturday, 7th November, 2015 has a lot of implications for our electoral jurisprudence. The judgment has laid down a radical, novel and insightful precedent in Nigeria. There is no judicial authority known to me whose facts are on all fours with this case.

Let me admit that I have not read the judgment. Therefore, my opinion on the judgment is neither infallible nor sacrosanct. However, the report of the News Agency of Nigeria (NAN) on the ratio (reason) for the epochal judgment is instructive. The material part of the report is reproduced below:

“The Tribunal, sitting in Abuja, declared the candidate of the All Progressives Congress (APC) and a Minister designate, Mrs Aisha Alhassan, as the winner of the April 11 governorship election in the state. In a judgment the three-member tribunal held that Ishaku was not validly nominated as candidate of the PDP and therefore was not qualified, ab-initio, to contest the governorship election.”

“Specifically, the tribunal held that the governorship primaries purportedly conducted by the PDP in the state was done in violation of section 78 (b) (1)(2) of the Electoral Act which guides parties nomination to the position of governorship candidate. It held that contrary to the provision of the section, PDP conducted the purported primaries at its national secretariat, Wadata Plaza, in Abuja with no clear delegation from the local government areas in the state.”

“The tribunal sustained the testimonies of INEC head of election monitoring that the commission was not aware of any primaries conducted by the party in line with the provision of the electoral act which produced Ishaku as the party’s flagbearer.”

“Section 78 (b) (1)(2) of the Electoral Act states: In the case of nomination to the position of Governorship candidate, a political party shall where they intend to sponsor candidates:

(i)            hold special congress in each of the Local Government Areas of the States with delegates voting for each of the aspirants at the congress to be held in designated centres on specified dates.

(ii)           the aspirant with the highest number of vote at the end of the voting shall be declared the winner of the primaries of the party and aspirant’s name shall be forwarded to the commission as the candidate of the party, for the particular state.”

“The tribunal held that the defence by the PDP that the primaries were shifted to Abuja because of security challenges in the state was rejected by the tribunal. It sustained the evidence of the INEC official that there was no primaries election in the state and the emergence of Ishaku through the purported election in Abuja was after the statutory stipulated time for party primaries had elapsed.”

“It held that since Ishaku was not duly sponsored by the PDP, the party had no candidate in the governorship election in the eyes of the law. The tribunal therefore voided the votes of the PDP and Ishaku in the election saying “it is a waste’’ and declared the APC and its candidate, which came second, as the valid winner of the April 11 election.”

It is wrong to relate or compare this case with the locus classicus case of Amaechi v. INEC (2008) 5 NWLR (Pt. 1080) p. 227. Whereas the issue in Amaechi’s was on who was the lawful and rightful candidate of the Peoples Democratic Party (PDP) as between Mr. Celestine Omehia and Mr. Rotimi Amaechi. The question in the Taraba’s case is whether the PDP participated at all in the election in the eyes of the law.

The law is now settled that qualification/disqualification is both a pre-election and post-election matter with concurrent jurisdiction exercisable by both the Election Tribunal and the High Court. The process of nomination of a candidate touches on qualification of the candidate and qualification is one of the four grounds cognizable by Section 138 of the Electoral Act upon which an election may be questioned at the tribunal. See the recent cases of Gwede v. INEC (2015) 242 LRCN 138 and Akpamgbo-Okadigbo v. Chidi (No. 2) (2015) 10 NWLR (Pt. 1466) 124.

Thus, the law has endorsed the hybrid status of qualification/disqualification of a candidate in an election. Accordingly, it is wrong for anyone to say that how the PDP nominated her candidate does not concern the petitioner and her party – the APC.

If the issue was solely on the qualification of the PDP candidate then the Tribunal’s order declaring the APC candidate as duly elected was arrived at per incuriam (in error) as the proper order would have been an order for a fresh election.

However, I need to restate that the main issue in this case is beyond the qualification of the PDP candidate, Mr. Darius Ishaku. Did the PDP as a political party participate in the April 11th, 2015 gubernatorial election in Taraba State in the eyes of the law? That is the crux of the matter. Although the Supreme Court held in the Amaechi’s case that it is a political party that is voted for in an election and not the candidate, the law is explicit that a party cannot participate in an election without validly nominating a qualified candidate.

The fact that the purported PDP primary election was held outside the stipulated time as stated by an INEC staff whose testimony was accepted by the Tribunal is conclusive of the fact that the PDP never validly nominated a candidate as required by law. In essence, the PDP did not participate in the election. It has been argued by some that it amounts to “double standard” for the Tribunal which sat in Abuja because of the security situation in the State to invalidate the PDP primary election which was taken to the party secretariat in Abuja also because of “security concerns”.

On the surface, this argument appears logical. However, the point should be made that the Tribunal was not the proper forum for the PDP to raise such a defence. If INEC that is vested with the constitutional power to monitor and supervise primary elections of political parties did not admit or agree with the defence of the PDP on why it held Its purported gubernatorial primary in Abuja instead of Taraba State as stipulated by the Electoral Act, there is no justification for inviting the Tribunal to consider, accept or agree with that defence.

Also, it should be emphasised that even If the primary was held in Taraba State it would not have altered the decision of the Tribunal since it was held outside the stipulated time. The Court of Appeal and possibly the Supreme Court is open for the respondents who are dissatisfied with the findings of the Tribunal to test whether indeed the purported primary was held outside the stipulated time.

Having regard to Section 143 of the Electoral Act, Mr. Ishaku will vacate office as the governor of Taraba State for the swearing in of Mrs. Alhassan of the APC except he appeals against the decision of the tribunal within 21 days of the delivery of the judgment.

I firmly believe that the decision of the Tribunal is legally defensible. Since the PDP cannot be said to have participated in the election, the Tribunal rightly held that the votes casted for the party and its candidate were invalid and wasted. The Tribunal’s consequential order declaring Mrs. Alhassan of the APC as the winner of the election is plausible, inviolable and in obedience to the provisions of Section 140 of the Electoral Act given that she scored majority of valid votes at the election.

The judgment is an audacious precedent against arbitrariness and impunity by political parties in the selection and nomination of their candidates. It is hoped that the PDP and other parties will be humbled by this judgment and refrain from political rascality and lawlessness in the interest of justice and democracy.