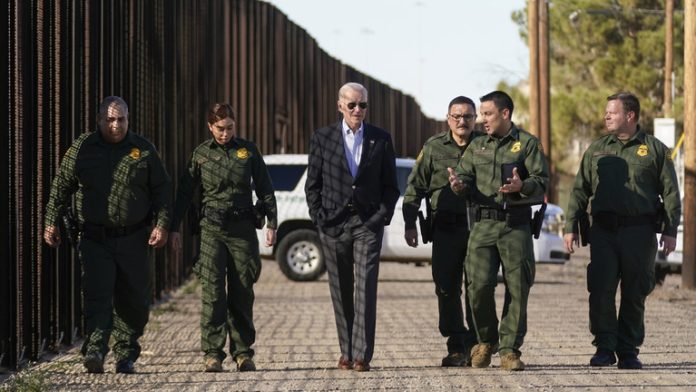 “Your visit to our southern border with Mexico today is $20 billion too little and two years too late,” Abbott wrote in a letter delivered to the president after Biden stepped off Air Force One in El Paso on Sunday. He went on to say that Biden’s visit was carefully planned in order to avoid seeing the devastation and damage caused by his open-border policies.

“Even the city you visit has been cleansed of the migrant camps that had overrun downtown El Paso because your administration wants to protect you from the chaos that Texans face on a daily basis,” Abbott said. “This chaos is directly related to your failure to enforce the immigration laws enacted by Congress.”

Illegal border crossings into the United States have more than fivefold increased since Biden took office in January 2021, reaching a record high of 2.76 million in the fiscal year that ended on September 30. Biden hadn’t been to the border since campaigning in New Mexico in 2008. On Thursday, he unveiled a new border strategy, including new restrictions on migration from Cuba, Nicaragua, and Haiti.

However, Abbott stated that the new policies are primarily aimed at assisting illegal migrants rather than preventing them from entering the United States. “All of this is happening because you have violated your constitutional obligation to defend the states from invasion by faithfully enforcing federal laws.”

In March 2021, the governor launched Operation Lone Star to help secure the border. The operation resulted in 23,000 criminal arrests and the seizure of over 354 million fentanyl doses. The state has also bused 16,000 migrants to so-called “sanctuary cities,” such as Washington and New York, that support open borders.

On Sunday, US Secretary of Homeland Security Alejandro Mayorkas chastised Abbott for failing to work with the federal government to address border concerns. “We cannot have unilateral governor action,” Mayorkas told ABC News.