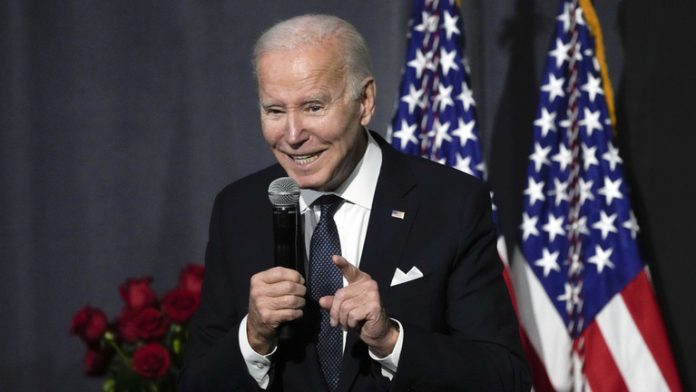 On Monday, US President Joe Biden attempted to sing “Happy Birthday” to civil rights icon Martin Luther King, Jr.’s daughter-in-law, but couldn’t recall her name as he stood in front of a crowd at an event honoring the black leader.

When Biden appeared to draw a blank halfway through serenading Arndrea Waters King in front of a microphone, he was unable to fake knowing her name, so he called her something that sounded like “Violet” instead.

“Well, it’s hell turning 30, but you have to put up with it,” the president told the audience at the National Action Network event, which was hosted by activist Al Sharpton. Waters King was turning 49 years old.

Following the music and comedy routine, Biden delivered what was supposed to be a speech honoring King, but deviated into attacks on the opposition party, which he called “fiscally demented.” He also chastised police officers and gun owners, claiming that the latter would need F-15s rather than AR-15s to take on the US government.

Biden is well-known for his public gaffes, which have become more frequent with age and more difficult to dismiss as a stutter. He appeared to forget both that Rep. Jackie Walorski (R-Indiana) had died and that he had publicly mourned her death in September, asking the Republican congresswoman’s family “Where’s Jackie?” in full view of the public. Later, Biden apologized to the family, but not before White House Press Secretary Karine Jean-Pierre tried to dismiss his behavior as normal.

In his MLK speech, Biden advocates for ‘voting rights’ legislation.

He forgot former President Barack Obama’s name on the campaign trail in 2020, despite spending much of the election season reminding the American electorate that he was the first black president’s VP, eventually settling for “President My-Boss.” His misinterpretation of the Declaration of Independence (“All men and women are created by the, you know, you know the thing”) is still a source of amusement among his detractors.

Biden is the oldest president in US history, at 80, and his tendency to forget people, places, and things has even members of his own party concerned that he is suffering from dementia or another cognitive issue. According to a recent poll, 57% of Democrats, 66% of independents, and 86% of Republicans do not want him to run for re-election in 2024. However, Biden has dismissed such concerns and recently announced his intention to run for re-election.