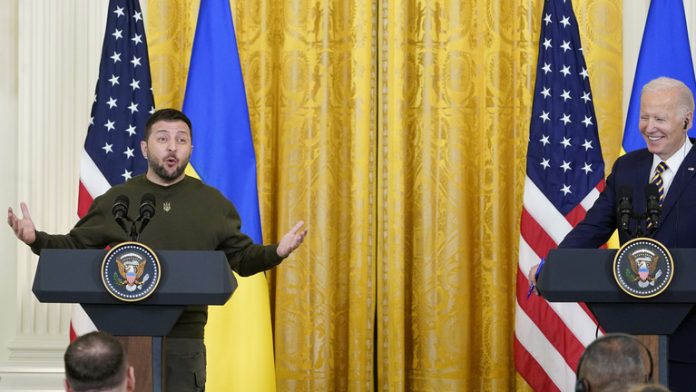 Giving Kiev unlimited weapons might collapse NATO, US President Joe Biden said on Wednesday during a joint speech in Washington with his Ukrainian counterpart, Vladimir Zelensky. Biden also stated that he is not concerned that the sale of Patriot missiles to Ukraine will exacerbate tensions with Russia, as Moscow has warned, because the missiles are “defensive” weaponry.

Following their discussion at the White House, Biden and Zelensky took questions from four hand-picked reporters. The most recent came from a Ukrainian journalist, who questioned why the West does not simply provide Ukraine with “all the capabilities it requires to free all territories.”

“His answer is yes,” the US president deadpanned, pointing to Zelensky, who responded with “I agree,” drawing chuckles from the assembled reporters.

Biden then stated that the US has “committed a huge amount of security assistance to Ukraine” even before hostilities erupted in February, despite the fact that in his prepared remarks, he had labeled the Russian military incursion “unprovoked and unjustifiable.”

“We gave Ukraine everything they needed when they needed it to defend themselves,” he claimed, referring to hundreds of tanks, armored vehicles, artillery, and ammunition.

More action would “risk splitting up NATO, Europe, and the rest of the world,” Biden said, stressing that he has spent “hundreds” of hours convincing partners across the world to support Ukraine, but “they are not seeking for a Third World War” by openly confronting Russia. “But I’ve already said too much.”

Zelensky landed in Washington on what US media called a “secretly orchestrated” visit, however word of it was leaked to a few sources on Tuesday. In the evening, he is set to address Congress, advocating passage of a $1.7 trillion budget measure that contains $45 billion for Ukraine in 2023. In a video published on Tuesday, he stated that Ukraine was grateful for all Western aid, but that it was “insufficient.”

A battery of Patriot air defense missiles is among the $1.85 billion in military help announced earlier in the day by the Pentagon, though Biden noted that training Ukrainian personnel to operate them, which would take place at a US station in Germany, will “take some time.” Zelensky stated that once the Patriots arrive, he will request more from Biden.