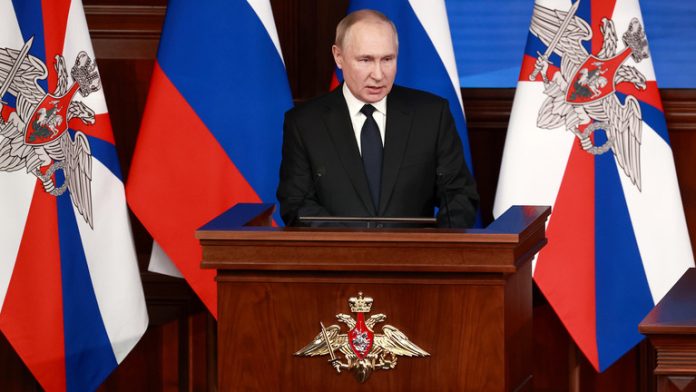 President Vladimir Putin stated on Wednesday during an extended meeting of the Board of the Ministry of Defense that Russia is facing practically the whole military potential of NATO in the ongoing conflict in Ukraine.

The Russian president also discussed the events that led to the current dispute with Kiev, emphasizing the significance of updating the country’s nuclear capability in order to protect sovereignty.

Here is a summary of Putin’s main remarks from his address.

Meeting with the West

Putin stated that Moscow’s “strategic adversaries” have always attempted to “cut down” and “break up” Russia because they believe it is “too big” and constitutes a threat. He emphasized that the West had been attempting to accomplish this for ages.

Meanwhile, Russia has always desired and strived to join the so-called “civilized world,” but has realized that it is simply not wanted there, according to Putin.

Ukraine as a fraternal country

Russia spent years trying to create not just neighborly, but brotherly relations with Ukraine, and nothing succeeded, according to Putin, who noted that “we have long considered Ukrainians to be a brotherly people.”

Putin describes the magnitude of the challenge in Ukraine.

“I continue to think that. Everything that is going on is tragic. Our shared tragedy. “However, that is not the product of our policies,” the president explained.

He went on to say that Russia’s geopolitical opponents have begun to employ a variety of measures to achieve their objectives, including intervening in the domestic affairs of former Soviet republics, particularly Ukraine, which has led to the ongoing confrontation with Kiev. As a result, it had become “inevitable,” according to the president.

Putin remarked that NATO is currently employing nearly all of its member states’ military capabilities against Moscow.

He did, however, add that Russia had learnt a lot from its previous mistakes and would not harm itself by militarizing the country.
“We will neither militarize the country or the economy,” Putin declared, emphasizing that Russia’s current level of growth does not necessitate such actions.

He went on to say that Russian military leaders have been charged with analyzing NATO’s tactics and capabilities, and that this information will be factored into Russia’s own training and equipment.

Putin stated that Russia’s nuclear arsenal is the primary guarantee of its sovereignty, emphasizing that new weapons will shortly enter service and committing to the expansion of the country’s defensive capabilities.

The president stated that Russia will continue to preserve and improve its nuclear triad, which includes missiles launched from aircraft, submarines, and mobile launchers and silos on the ground.

The president stressed the need of increasing the use of drones in the Russian army, citing the country’s experience in producing underwater unmanned aerial vehicles (UAVs), which he believes should be developed to construct more advanced air and ground drones.

The Russian army will be significantly expanded, according to the defense minister.

He advocated for updating communication networks and implementing artificial intelligence technologies at all levels of decision-making, pointing out that rapid and automated systems had proven to be the most effective on the battlefield.

In reaction to NATO boosting its forces on Russia’s border and potentially extending membership to Finland and Sweden, the president also approved a number of structural adjustments requested by Defense Minister Sergey Shoigu.