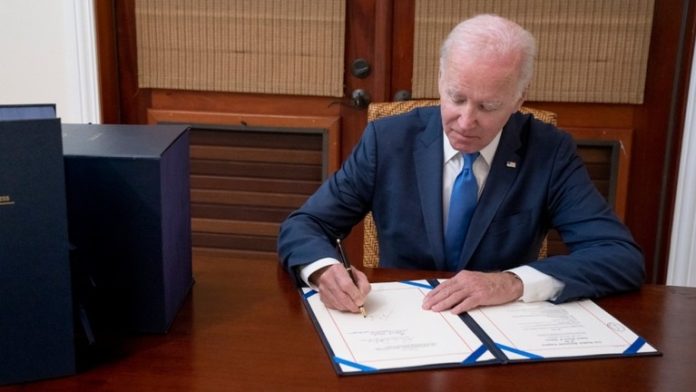 After weeks of partisan debate, US President Joe Biden signed a massive $1.7 trillion spending bill into law, averting a government shutdown. In addition to funding federal agencies, the legislation prohibits TikTok from being used on government devices and provides approximately $45 billion in aid to Ukraine.

Biden announced the move on Thursday night, while still on vacation in the US Virgin Islands, in a social media post, saying the bill would cap off a “year of historic progress.”

“It will invest in medical research, safety, veteran health care, disaster recovery, [Violence Against Women Act] funding – and it will provide critical assistance to Ukraine,” he explained.

The bill authorizes $773 billion in non-defense discretionary spending, a 6% increase over last year, and $858 billion in military spending, a $76 billion increase over 2021. Another $45 billion will be allocated to Ukraine, including $9 billion to train and equip the country’s armed forces, $13 billion in economic aid, $4 billion for refugee relief, and $300 million for local police and border guards. Furthermore, $687 million will be used to replenish depleted US weapons stocks, following over $20 billion in direct aid to Kiev since Russia’s military operation began in late February.

Under the new legislation, federal employees will also be prohibited from downloading the TikTok app on government devices, after some lawmakers raised privacy concerns about the app’s Beijing-based parent company, ByteDance. Senator Josh Hawley, echoing other Republicans, claimed the app poses a “major security risk to the United States,” adding that “until it is forced to sever ties with China completely, it has no place on government devices.”

More than a dozen US states have already blocked or restricted TikTok access from government computers, and lawmakers in the House of Representatives were reportedly instructed earlier this week to delete the app from state devices after the Office of Cybersecurity claimed it identified “a number of security risks.”

Hundreds of House Republicans had spoken out against the omnibus spending bill, demanding that it be delayed until the GOP takes control of Congress in January. Due to intense disagreements on several issues, including Ukraine aid, lawmakers were forced to pass a stopgap measure last month to avoid a government shutdown, but the two parties later reached compromises on the $1.7 trillion legislation.