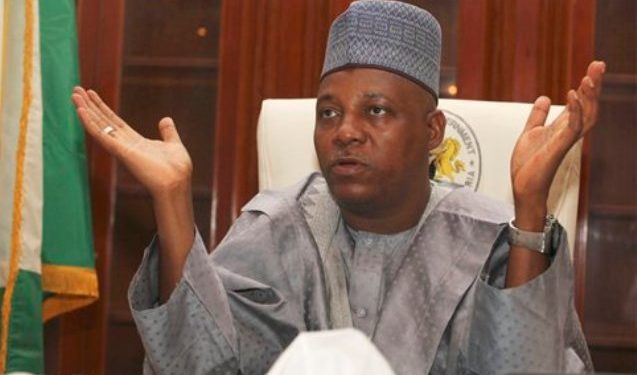 The Governor of Boko Haram plagued state, Kashim Shettima this morning went on a visit to see the impact and extent of damage caused by the Boko Haram terrorists and also to empathize with victims of yesterday’s attacks (if there were any) along Moromti and Njimtilo towns where the said Boko Haram concentrated their attacks.

Surprisingly, the Nigerian Army who are stationed at the 333 Battalion Base (soldiers who could not engage Boko Haram Terrorist from, entering Maiduguri) opened fire on the convoy of the Executive Governor of Borno State, Hon. Kashim Shettima.

His security details and mobile police officers managed to withdraw and retreat back to the city centre for the safety of the Governor.

The Governor however stopped his convoy at 707 Housing estate to calm tensions and debunk the rumours that Boko Haram are attacking people at Njimtilo town.

This incident is fully verified.

Government media has denied this was an attack on the governor, saying it was some sort of “21 gun salute.”
—

You should know that voting GEJ is a guarantee of another 4 years of insurgency that will claim more lives and disintegrate Nigeria.

MUST READ! Evidence of THISDAY Corruption: How ...