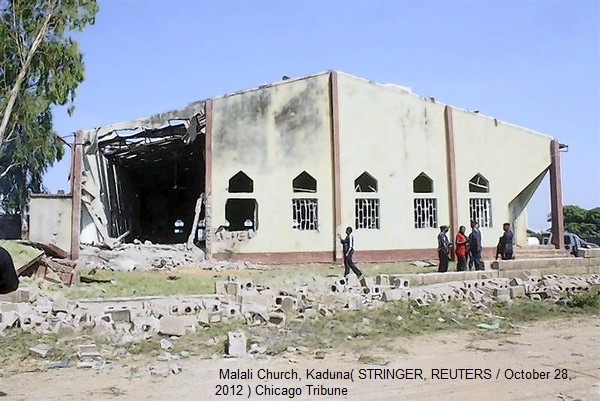 The terrorist reportedly attempted to drive his car through the gates. When blocked from doing so by security, he allegedly reversed and rammed the gate before detonating his powerful explosives. The explosion was heard far off in Kaduna, up to the GRA.

There is no detailed report of the number of causalities, however the pastor was said to have been among the injured.

A non related (fake) video from outside Nigeria as evident by the car plate numbers and taxi cabs (possibly Ghanaian), was posted on youtube by user “Henri Ikwuemesi” , and said to have occurred due to the shock of the explosion. It was then, still with only 1 view, immediately posted on Nairaland, Nigeria’s largest internet forum by user “lestat“. In the non-related Youtube video, several are seen dead and injured as a trailer truck veered off the road in Kaduna. A man is seen holding a boy with a severed head as a woman beside him wails. Two other victims are seen lying immobile on the street. Please note- this is a fake video and attempt by unscrupulous characters to provoke sectarian strife.

There are many groups and individuals in Nigeria who wish to foment sectarian strife to achieve their wicked motives, which include the promotion of a violent disintegration of the country.

Boko Haram is a Kanuri, North East based sect which operates out of Borno and Yobe states as well as neighboring Niger republic and Mali. The deadly sect has been responsible for at least a thousand deaths for the last two years in the Northern parts of Nigeria.

Police have been mobilized to prevent frustrated Kaduna youth from taking revenge on innocent people for the actions of this terrorist sect.

Of recent, Catholic Churches have more commonly been the victim of Bombings against Christians.

Reuters- One wall of the church was blasted open and scorched black, with debris lying around. Police later moved in and cordoned the area off.

Shortly after the blast, angry Christian youths took to the streets armed with sticks and knives. A Reuters reporter saw two bodies on the roadside lying in pools of blood.

“We killed them and we’ll do more,” shouted a youth, with blood on his shirt, before police chased him and his cohorts away. Police set up roadblocks and patrols across town in an effort to prevent the violence spreading.