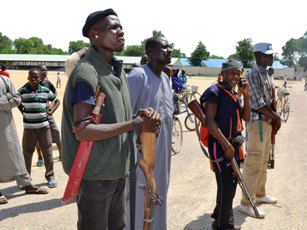 With dane guns, bows and arrows, people in Maiduguri and its environs have vowed to confront Boko Haram insurgents who have in the past year been unleashing terror on towns and villages. Weekly Trust reports.

Angered, frustrated and tired of the daring attacks by Boko Haram in Borno and neighboring states, people from various communities are increasingly becoming agitated. Many observers believe that the bold, but dangerous step taken by the residents in acquiring small arms stems from the protracted activities of the insurgents and the challenges they are posing for security forces.
During every attack, whether in the villages or towns, residents are at the receiving end and they pay with their lives, even as their means of livelihood suffer as well.
“Necessity is the mother of invention,” said Kolo Jarma, “We know we don’t have the AK-47 and other weapons that Boko Haram fighters have, but we have the heart, we also have dane guns, talismans and charms. And most importantly, we have God on our side,” Jarma, a local hunter, said.
In Nigeria, there are laws that proscribe illegal possession of arms and ammunitions even though the Boko Haram insurgents have amassed them. With no money or connections to acquire sophisticated arms legally, thousands of people, especially in Maiduguri, say with the few weapons they have, they are ready to protect themselves against the ravaging effects of Boko Haram’s machine guns, rocket propelled grenades, fully loaded AK-47 rifles and destructive Armoured Personnel Carriers. 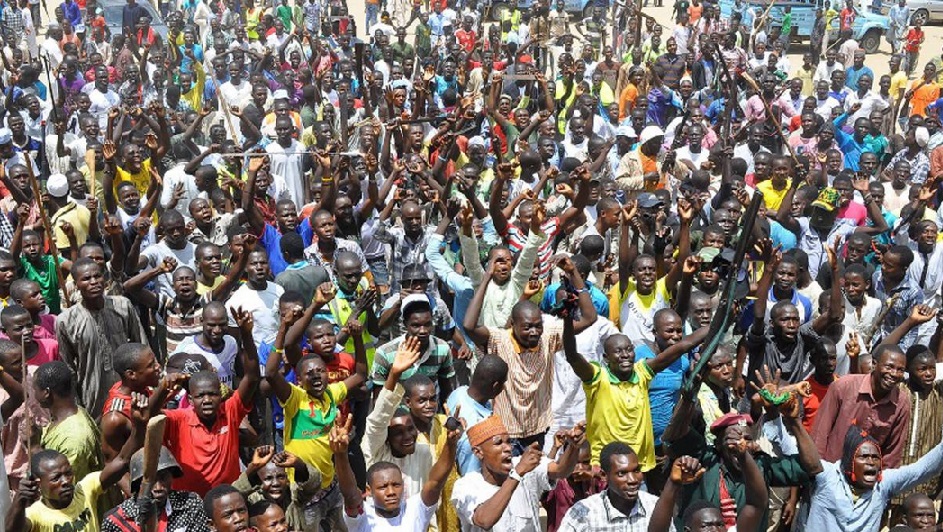 ‘Enough is enough’
According to many youths, if confronting Boko Haram in the bushes would mean “purifying” Borno and environs from the blood spilling, they are ready to put their lives on the line. Around May, 2013, youths rose in defence of Maiduguri metropolis and chased hundreds of insurgents out. But while the state capital enjoyed relative peace, hundreds of towns and villages in Borno, Adamawa and Yobe States have come under severe attacks.
Youth Vigilantes, popularly known as ‘Civilian JTF’ in Maiduguri have in the past assisted security personnel to “flush out” Boko Haram sect members, a development that attracted the support of the Borno State government as well as the military and police establishments in the state. However, owing to increasing attacks in towns and villages in the last few weeks, it is now a common sight seeing not only the vigilantes but people from all walks of life brandishing all sorts of weapons like dane guns, daggers, cutlasses, swords, knives, bows and arrows on the streets, especially in the state capital.

At the inception of the ‘Civilian JTF’, most of them wielded only sticks and knives, but now that the fight is fiercer, many are taking extra measures to protect themselves.

Of blacksmiths and black markets
Weekly Trust investigations revealed that blacksmiths are now enjoying high patronage, doubling as gunsmiths of sorts. While only a few of them produce dane guns, a majority are into fabricating cutlasses, swords and others.  Sources say residents in Damboa are Dane gun specialists, but the destruction of the town by Boko Haram had crippled the business.
But that same business appears to be thriving in Maiduguri as many blacksmiths are learning the craft. Many of the gun-makers were sighted at Gamboru Market, Shehuri and other areas in Maiduguri. Some of them who spoke to Weekly Trust admitted that they now enjoy brisk business from non-Civilian JTF citizens.
Abatcha Kawu, a blacksmith at the Gamboru market, said he only serviced hunters who mostly come from villages, “But now members of the Civilian JTF also buy.”
“Since I started this business many years ago, I have never enjoyed as much patronage as I am enjoying now due to the fight against the insurgents,” Kawu, who also make knives, swords and daggers, said.
At the market, our correspondents observed that the blacksmiths displayed cutlasses, swords and daggers but there were no dane guns on display, probably due to the security implication.
Another blacksmith, who gave his name as Buzu Dan Baiwa, said he only produces dane guns on request. Declaring youth vigilantes and hunters as his main clientele, he said many of them prefer pistols because they are cheaper than the larger versions.

Price of self-protection
“The prices of the guns depend on the quality and size. A small one goes for between N15, 000 to N17,500 while the big ones go for N50,000 or more. They are expensive these days due to the high cost of the materials,” Baiwa added.
Another blacksmith, Gunderi Mohammed, also declared gun-making as “good business” since the rise in profile of the Civilian JTF.
Gana Bukar, who mainly sells sharp metal weapons, said since last year when the youth vigilantes began to fight the insurgents, patronage has increased. “Also, with the recent threat that Maiduguri will be attacked, more customers have been coming to buy knives, cutlasses and swords,” he explained.
On the effectiveness of the weapons, some youth vigilante told Weekly Trust that are satisfactory. “Despite the superior weapons in the hands of Boko Haram, our local types still help protect us,” one Babakarami Ali said.

Safety is trending
The rush for dane guns heightened on Thursday when over 10,000 people including youth vigilantes, local hunters, retired military, police and para-military operatives, artisans and petty traders indicated interest in tackling Boko Haram head-on.
Armed with various local weapons, they gathered at the Ramat Square in Maiduguri, before they proceeded to the Palace of the Shehu of Borno, Alhaji Abubakar Garbai Al-Amin El-Kanemi where they sought for his blessing.
Reports suggest that insurgents are also perfecting plans to attack the state capital, prompting the resolve of the people to rise against the move. The angry residents also indicated readiness to storm Gwoza, Gamboru-Ngala, Dikwa, Bama, Banki and many other places.
The state Coordinator of the ‘Civilian JTF’, Mallam Abba Aji Kalli said he would be glad if the Federal Government will provide them with arms and logistics to carry out the operation. But he added that even if the assistance doesn’t come, they would not retreat. “The various groups you see here have vowed to go after the insurgents even if not well-armed. We are optimistic. We have done this before when Maiduguri was a theatre of mindless killings by Boko Haram. We chased them out of town, but they have regrouped and are now attacking people.”
Kalli added that his group is more motivated with the support from retired military men, local hunters and other citizens.

Royal seal
In his response, the Shehu of Borno gave them N1 million but called on the volunteers to always abide by the law. He was accompanied by the Waziri of Borno, Yarima Mukhtar, council members, district and village heads as well as courtiers. He commended the efforts of the group in tackling Boko Haram and urged them to always follow the directives of military authorities.

The Shehu said: “I want to thank you for this visit and the effort you are collectively and voluntarily doing in order to fight Boko Haram, who are bent on not only destroying our social and economic structures, but also innocent lives. I also want to appeal to you to desist from politics, religious or ethnic considerations. In anything you are doing, you must make sure that you consult all other security agencies so that you work hand-in hand to end terrorism.”

Treading with caution
Weekly Trust encountered some of the volunteers. Suleiman Abu, who was brandishing his double-barrelled local gun, said his weapon is “very effective”. He claimed to have killed many insurgents with it. “I’m proud that I have it,” he said.
Another youth, Kana Babagana, said with his locally-made gun, he could confront insurgents anywhere. “It’s sad that the authorities restrain us from outright confrontation,” he said.
Some ex-servicemen who spoke to Weekly Trust expressed readiness to join the fight against Boko Haram. Retired Sergeant Husseni Abatcha, who said he served in the Nigerian Army, said all they’re asking for is that the Federal Government should provide them with arms to fight.
A senior security official in Maiduguri said though the people have the right to protect themselves, it will be foolhardy for them to take to the bushes with dane guns. “We would not encourage them to take law into their hands or to do something inimical to their safety. But we’ll give them every support provided that is not against rules of engagement. We are not relenting in our efforts to contain the insurgency and all shall be well very soon,” he said.
But for now, blacksmiths are smiling to the bank, while locally made and somewhat crude arms are trickling onto the streets. It remains to be seen if that trickle will feed into a flood and if that will help in any way stem the huge tide of Boko Haram.