We are calling on all good citizens across the world to support the mission if Nigerian civilian patriots against Boko Haram terrorists.

On Thursday, Civilian-JTF, vigilante’s, hunters and ex-military and police officers totaling over 10,000 gathered at the Shehu of Borno, Abubakar Elkanemi’s palace for his blessings as they set out to take the battle to Boko Haram in their hideouts.

The State coordinator of the Civilian-JTF, Abba Aji Kalli said: “We are at the Shehu’s palace to seek for his blessings and fatherly advice, because we have all vowed to go after Boko Haram even if we are not well armed. We are optimistic that with our sticks and other local charms, we will raid all terrorists’ hideouts and kill them when given permission by the federal government… We in the Civilian JTF are now more motivated with the support and assurances we have now received from retired military men, local hunters and other patriotic citizens who have expressed their willingness to join us and help end the madness perpetrated by Boko Haram terrorists in Borno State and northeast in general.”

The Nigerian army has for the past five years, failed to abate the meaningless terror that has destroyed life and hope in erstwhile peaceful Borno, the “home of peace.” To complicate matters, Nigerian army chiefs have been recently implicated as sponsors of the Boko Haram terror group.

It is time for a civilian action against Boko Haram.

The civilians are determined, their resolve is unshakable. They know the terrain and they will rather die fighting than die as sitting ducks.

We the Nigerian people and the world at large are proud of the patriots who have decided to take the war to Boko Haram.

So far, over 10,000 civilians have gathered for this mission with their local guns and all other weapons they can lay hands on; and thousands more youth promise to join the mission to recapture all claimed territory in Borno and search and destroy all elements of terror in the State. Civilians were responsible for checking the earlier advance of Boko Haram in 2013 when they had similarly conquered more than half of Borno state, but when the then army Chief, General Ihejirika suddenly disbanded the Military JTF, replacing it with the division 7 and terminated the civilian-JTF joint action with the military, Boko Haram was given the opportunity to fully recover and has again advanced out of Sambisa and occupied many towns in Borno, Yobe and Adamawa state as they continue their pogrom. It is time for the civilians again and this time they promise to finish Boko Haram off completely by the grace of the Almighty.

We solicit your prayers and good wishes.

This is going to be a long and hard sacrifice to bring peace to Nigeria. Our brave civilians need material and financial support. They need weapons and tools including torch lights, walkie-talkies, petrol and even food for this altruistic mission.

ENDS donates some of these items to the people as much as we can afford but what we give is not even a tip of the ice berg; to win the war against Boko Haram and free not just our abducted 2340Angels but the entire Nigeria from the clutches of terror, we need every penny you can contribute and continue to contribute to the warriors of Nigeria.

You can also make donations through: http://www.GoFundMe.com/ends-nigeria

Please contact us for the Nigerian bank accounts for the Civilian-JTF or for different donation options. Email: [email protected]

According to latest reports from Borno, Boko Haram is in towns now because Sambisa forest has flooded due to the rains. This is the time to corner them.

Boko Haram is very afraid of the Civilian-JTF. In “Shekau’s” last video, he complained about them and threatened them only, not mining or mentioning the Nigerian army. The Civilian-JTF replied that “we are going to be your death.”

Let’s support our promise to “Shekau.” 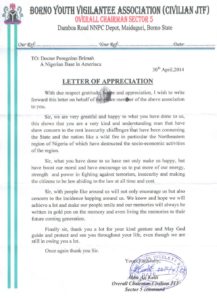