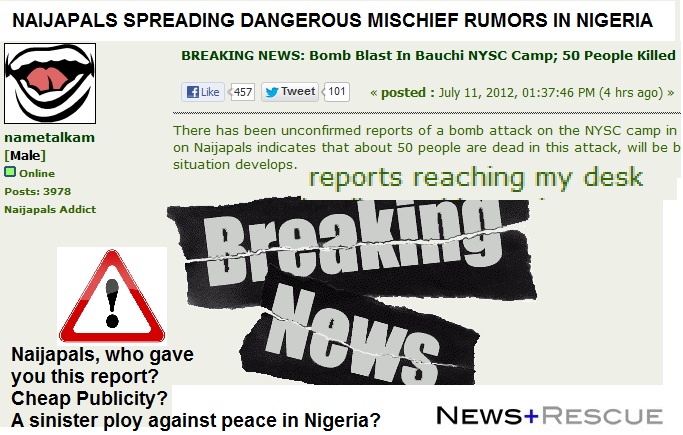 The rumours, which appeared in some news outlets, had indicated that some corps members posted to the State were killed in the incident.

A statement from the Governor’s Office, signed by the Chief Press Secretary to the Governor, Ishola Michael Adeyemi, described the rumour as “baseless, unfounded and an information that cannot be substantiated by the mongers who are bent on disrupting the peaceful atmosphere in the state.”

Mr. Adeyemi described the story as the handiwork of a few enemies of peace who want to cause unnecessary panic among the people, particularly the corps members who are visitors to the state.

“As a government we are committed to the protection of lives and properties of every law abiding citizen of the state, adequate security measures have been put in place and we are working hands in hands with all security agencies in the state and the effort is paying [off] as Bauchi State has remained peaceful in spite of the security challenges the country is facing,” he said.

He assured families who have children and wards at the Wailo NYSC Orientation Camp that the situation there is calm and that corps members were seen going about their normal camp activities without any hindrance. He further called for the rumour to be disregarded as “adequate security measures have been provided at the Camp.”

We ask Naijapals to produce the individual who put this report ‘on their desk’, to the public and the Nigerian security services, so he or she can be investigated for his participation in a bomb-terror physical or media propaganda war against the peace of Nigeria and the world.

Did the person or people who gave Naijapals the report, actually plant a bomb somewhere that they expected to have gone off? Naijapals must immediately be investigated on their source of this dangerous story. We hope and believe the Nigerian and international security services are on this case.

The report was circulated from a posting on a social media website.

The Director of the State NYSC, Nuhu Kwaghe, who debunked the report, describing it as ‘wicked and callous’, said  that the over 1,300 corps members deployed to the state are ‘safe and in good health’.

Kwaghe told THISDAY: “You are in Bauchi and if anything happened you will be aware. Nothing has happened like that at all. All is well in the camp right now and the corps members are on the parade ground as I am speaking with you now.”

One of the corps members, who spoke with our correspondent at the camp, Miss Faith Penuel Thauthau said the rumour came to her as a surprise.

“My phone was bombarded this morning and throughout the day with the news of the blast. I was very surprised to hear that there was a bomb blast at the camp. There is nothing that that. This is very wicked. On the contrary we are having a good time in camp even though the exercise is very stressful but I am enjoying it and meeting people and making friends.

“While will anyone want to spoil it? It is very unfortunate!”