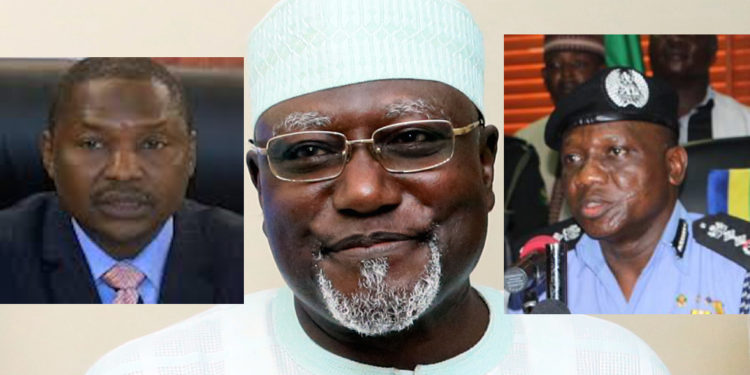 The Director General of the State Security Services, Lawal Daura, said on Thursday that he advised the Attorney General of the Federation, Abubakar Malami, to meet with Abdulrasheed Maina abroad

Mr. Maina is wanted for alleged pension fraud and is currently on the run from the anti-graft agency, EFCC.

Mr. Daura, while giving his submission on Thursday to the House of Representatives ad-hoc committee investigating Mr. Maina’s controversial reinstatement and promotion in the civil service, however said he advised him to do so in presence of a third party.

“The attorney general of the federation sometime in 2016 or 2015 (can’t remember the exact day) because it was not through a formal document, placed a call to me when he was outside the country and requested me on a request he got through a source that Maina wanted to meet him.”

“He wanted me to advise him whether to agree to see Maina or not in that foreign country.”

“He should see him with a third party,” Mr. Daura said.

The security chief said the attorney general complied and met Mr. Maina in the presence of a third party.

On the accusation of the SSS shielding Mr. Maina, Mr. Daura said Mr. Maina had approached the service with a letter alleging threat to his life and therefore requested for protection.

He said “the letter was scrutinised and fears expressed by Maina were also to a large extent established”.

He said the service decided to look into the matter so as to protect Mr. Maina.

“Because of the right to life which is guaranteed by our constitution universally recognized, Maina’s case was directed to be looked into so as not to allow his life to be in jeopardy.”

Mr. Daura said no agency, including the EFCC, wrote the SSS seeking to arrest Mr. Maina.

He added that the service has nothing to do with the reinstatement of Mr. Maina and his subsequent promotion.

Unlike the SSS, however, the Nigeria Immigration Service, NIS, said it was notified in 2013 to put Mr. Maina on a stop list and prevent him from travelling abroad, which it complied with.

The NIS chief, Mohammed Babandede, also told the committee that the NIS has no record of Mr. Maina leaving the country since 2013.

PREMIUM TIMES on October 20 broke the story of Mr. Maina’s controversial return to civil service after years of being on the run, sending shockwaves through the nation and placing the administration’s conduct under renewed public criticism and scrutiny.

Mr. Maina was dismissed from service in 2013 during the Goodluck Jonathan administration for absconding from office following allegations that he diverted billions in public funds for his own use when he headed the pension reform task force.

The Economic and Financial Crimes Commission subsequently moved to arrest and prosecute him; but Mr. Maina, who was fired as an assistant director, bolted from the law.

He was believed to have fled to Dubai, where he had remained until some officials of the Buhari administration allegedly facilitated his return under questionable circumstances this year.