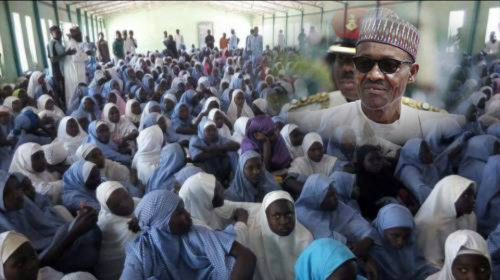 In an obvious move to prevent the abduction of students by Boko Haram insurgents, Borno State Government on Monday announced the closure of all boarding schools in 25 out of its 27 local government areas.

The closure, the commissioner said, involved all female and male boarding schools.

This implies that boarding schools have been closed in 25 out of 27 local government areas of the state.

The closure of the schools was announced the same day President Muhammadu Buhari told visiting American Secretary of State that Nigeria prefers to have schoolgirls abducted by Boko Haram from Chibok and Dapchi back through negotiation, rather than using the military to rescue them.

“We are trying to be careful. It is better to get our daughters back alive,” the President told Rex Tillerson at in an audience at State House, Abuja, Monday.

He added that Nigeria was working in concert with international organizations and negotiators, to ensure that the girls were released unharmed by their captors.

Lawal Daura, the head of Nigeria’s secret police, the Department of State Services had also revealed about three weeks ago that negotiation is going on with different factions of Boko Haram to free Nigerians they have been holding captive.

DSS, with the support of Switzerland and the International Red Cross and Red Crescent, has been at the vanguard of Nigeria’s negotiation with Boko Haram for freedom of hostages. Nigeria has been able to get back over 100 of the 276 schoolgirls abducted by the insurgents four years ago in Chibok, Borno State.

The latest of such abductees released through negotiations with Boko Haram were three lecturers of the University of Maiduguri and 10 women. The women were abducted on June 20 last year while traveling from Maiduguri to Askira Uba local government area to attend a burial. The freed lecturers were abducted while searching for oil in the Lake Chad Basin as consultants to the Nigerian National Petroleum Corporation, NNPC.

While receiving the freed abductees at Aso Rock Villa, Abuja, about three weeks ago, President Buhari had said while ‘the government was fully aware of the expectations of the families of the abductees and the general public for their immediate freedom, the path to freedom for them has been a “painstaking and protracted” process.

Buhari also used the occasion to reiterate the resolve of his administration to ensure all persons abducted by the insurgents are rescued or released safely, speaking against the backdrop of the February 19 abduction of 110 girls from from Government Science and Technical Girls College, Dapchi, Yobe State: “I have since directed all security agencies to immediately ensure that every effort is directed to ensure the safety of our schools and students as well as bringing back the abducted girls to their families. “Government remains unrelenting towards rescuing all those abducted.”

Daura had also at the event told journalists that negotiating with Boko Haram was the “safest” means of rescuing the three abducted lecturers of the University of Maiduguri and 10 women from captivity. “These negotiations took several months and the Department of State Services with the support of the external elements of the group in diaspora and support from friendly countries and liaising with International Community of the Red Cross, made the rescue possible,” said the DSS DG.

He added that the process was slow because two different groups were holding the hostages while the negotiations took place mostly outside the country, though subsequently finalized in the theater of operations.

“The negotiations were mainly centered on an attempt at conflict mitigation which includes the fate of arrested members of the insurgent groups especially, accepting to free by government those found not to be culpable in any criminal activity.

Also, possible cessation of hostilities especially the attacks with IEDs on innocent civilians, worship centers, schools and other public places in return for temporary stoppage of air strikes by helicopter gunships,” Daura said of the conditions for the release of the hostages.

The International Committee of the Red Cross had always explained that its role in the process was to facilitate the hand over from the insurgents to the Nigerian military of hostages, acting as a neutral intermediary at the request of Boko Haram and the Federal Government, with the Department of State Services as representative.

But the big question which the DSS has failed to disclose was the huge ‘ransom’ usually exchanged with the insurgents for the abductees. While there has been no information on the amount paid to get Boko Haram to release the university lecturers and the 10 women, reports indicated that between two to three million euros were paid by the Federal Government to Boko Haram in exchange for the release of 82 Chibok girls in 2017.

According to the BBC, the money paid in cash was handed over to the insurgents in exchange for the release of the girls in addition to the release of five senior Boko Haram militants were bomb-makers.

“The ransom was €2m. Boko Haram asked for euros. They chose the suspects and gave us the list of girls who would be freed,” BBC quoted a source as confirming the deal with Boko Haram.

The presidency has not denied the claim. But an indication that the DSS will do anything to keep details of the negotiation away from the prying eyes of the public was the recent arrest and detention for several days of a journalist over an article that reveals some of the major dramatis personae in the negotiations and ransom payments.

The DG of DSS and other Nigerian officials involved in the very opaque negotiations are also feeding fat on it, just as Boko Haram is using its own part of the ransom for restocking of deadly weapons that will faciliate more abductions, according to sources.

Just recently, one of the Boko Haram commanders released was seen in a video posted on this website boasting of more attacks against Nigeria.

The willingness of the Federal Government to pay ransom for abductees is fueling the thirst of various factions of Boko Haram for mass kidnappings.

Nigerian lawmakers had alluded to this during debate of the abduction of Dapchi girls recently.

The lawmakers explained that Boko Haram now kidnap women and girls so as to negotiate and “get money” from the federal government “just like the case of Chibok girls.”

“What happened is a lesson for us. That Boko Haram sees girls or women as value targets. What they did in Chibok earned them some funds, because negotiations were held somehow and they got a lot of money,” Senate Leader, Ahmed Lawan said during the debate.

“We need to be very proactive in this case because the idea of sitting down to always negotiating and paying ransom with this action, we are empowering the Boko- Haram so that they would continue to do more,” he added.

Borno Commissioner of Education said the closure of schools was to avoid falling into the trap of paying Boko Haram: “We have decided to relocate all our girls in boarding schools to within the metropolises of Maiduguri or Biu because we do not want a recurrence of the Chibok case.

“If the entire security situation is not addressed, one cannot be sure that it won’t happen again. If people start seeing that over time there are no more attacks, they will know that peace has returned.

“But in a situation where you cannot move to some parts of the state without escorts and you are hearing that in some cases, the military is being ambushed, you cannot deceive yourself and say everything is okay.

“It is just that they (Boko Haram insurgents) have received more attention by abducting girls; there is more to gain by the insurgents when they carry girls because of the concerns of the people and government more for the womenfolk.”

Kubo revealed that the state government had collapsed all the girls’ boarding schools into Biu and Maiduguri, adding: “There are some other communities that operate girls’ schools but are not boarding schools, they have day schools, with the girls going back to their homes to sleep.”

The commissioner, who also commended the police for deploying their men in schools in the state, expressed hope that the deployment was sustained and not an action dictated by the emotions brought about by the abduction of the Dapchi schoolgirls.

He said measures had been taken to get all the schools in the troubled state, the birthplace of Boko Haram, shielded from any further attacks by the terrorists.

Kubo said: “It is a security measure and not meant for public consumption, but I can assure you that all the necessary machinery and apparatus have been put in place to safeguard our children.”

He also revealed that members of the vigilante group, known as the Civilian JTF, and local hunters had been deployed to keep schools safe in the state.

He, however, lamented that even with the arrangements put in place to secure the schools, no one was certain that there would be no more attacks by Boko Haram.

“What is most important and paramount is this, whatever arrangements you have is dependent on local security. What I am trying to say is that if a community is infested with insecurity, no matter the arrangements, it cannot stand the test of time.

“Like what happened in Chibok and like my issues with the former president (Goodluck Jonathan), he asked as to why we allowed these girls to be abducted in Chibok.

“He knew very well that the North-east is infested with insecurity, if there was no insecurity, no one would come into a school and pick up girls.

“So, whenever the security situation improves in the area, apprehension within schools and communities would naturally wane. But as long as insecurity is not totally addressed in the communities, whatever measures you put in place cannot succeed.

“This means that the federal government should continue in its determination to make sure that peace is restored.

“And people too have roles to play because the federal government can only act on information given to them by the members of the community. I believe much has been achieved, but more can be achieved if having recorded some success, the security agencies do not relax.

“When the security agencies relax sometimes, this has given the insurgents the opportunity to continue with their nefarious activities,” he added.