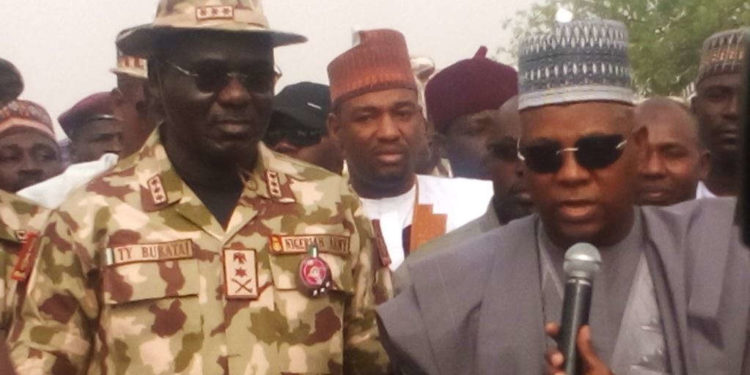 The people of Borno have once again been left to the whims of Boko Haram terrorists, with the Maiduguri-Damaturu road now a death road where civilians are abducted every day.

It is believed that the new dynamic governor Professor Babagana Zulum, stopping the practice of his predecessor, “wanna-be cabal” Kashim Shettima, whereby the military top command was bribed with billions in a pay to protect scheme, is behind the army abandoning its duty to protect the state and environs.

Boko Haram has returned to the days of Jonathan with the European Union being the latest to comment on the lack of progress in the so-called war against the terror organisation.

Borno governor Professor Zulum was recently seen venting his frustration at soldiers for demanding bribe from commoners to protect them. This could also have led to more angst with Nigeria’s army chief Tukur Buratai appearing to have abandoned the state to terror.

An Islamic human rights organization, the Muslim Rights Concern (MURIC) has appealed to soldiers in the North Eastern part of the country not to abandon Maiduguri – Damaturu road. There are reports that men of the Nigerian Army have abandoned the road since the state governor exposed the extortion going on in that axis. It will be recalled that Governor Babagana Umara Zulum last week cautioned soldiers against extorting motorists on the Maiduguri – Damaturu road.

The appeal was made in a statement circulated to pressmen on Tuesday, 21st January, 2020 by the director of the organization, Professor Ishaq Akintola.

“Reports reaching our headquarters from our members in Borno State lend credence to the fear of Boko Haram returning to the roads to make life unbearable for road users. This is because soldiers have allegedly abandoned the check-points along the road. This is unethical, dangerous and counter-productive.

“While we appreciate the sacrifices being made day and night by soldiers, we find it necessary to affirm the need for soldiers to be professional in carrying out their duties. Under no circumstances should civilians be exposed to danger. These are the tax payers and revenue generators who make it possible for soldiers’ salaries to be paid and for military hardware to be purchased.

“We sincerely hope that Borno State is not one of the zones from where the military were asked to withdraw recently. We appeal to the Chief of Army Staff to ensure that the Maiduguri – Damaturu road is not abandoned. Though technically defeated, Boko Haram’s guerrilla tactics necessitate maintenance of military presence particularly on the state’s highways. It is not over until it is over.”