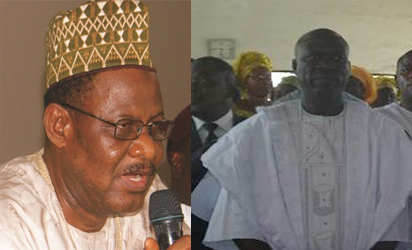 ILORIN-The Chairman and the Secretary of the All Progressives Congress (APC) in Kwara state, Hon. Ishola Balogun Fulani and Chief Bode Adekanye respectively have been kidnapped at gun point along Lokoja Okene road in Kogi state.

This development according to Vanguard checks have thrown the government and the ruling party into serious confusion as government officials and party members were seen in groups discussing the incident.

The Publicity Secretary of the party in the state, Alhaji Sulyman Buhari confirmed the incident Friday night in an interview with journalists. Buhari explained that the incident occurred at about 10am on Friday while Balogun- Fulani and Adekanye were returning to Ilorin on their way from Abuja.

According to him, “We received a call from the line of the chairman around this time, (10am) telling us of the kidnapping issue. No ransom was mentioned and all attempts to make further enquiries from them proved abortive as the line was no longer available”.

“We are on it to see if we can still establish a link with them. We have taken all the necessary steps and linked up with relevant security operatives to ensure their safety and eventual release,” he added.