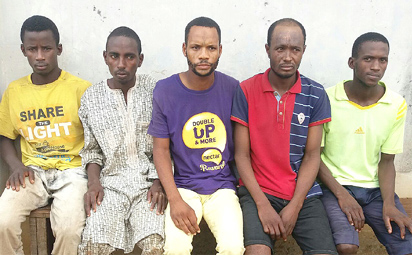 Residents of Kaduna Metropolis can now sleep with their eyes closed following the recent clamp down on a dreaded gang of kidnappers made up of Fulani Herdsmen who had held the entire State hostage.

The suspects who were rounded up from their hideouts in Kaduna and Zaria by operatives of the Inspector General of Police Special Intelligence Response Team, IRT, were alleged to be behind the March 21, 2016, abduction of the President and Vice President of the United Church of Christ in Nigeria, HEKAN, Rev Emmanuel Dziggan, and Rev Illiya Anthony respectively and another pastor of the church, Rev Yakubu Dzarmaý, at Dutse village in Kaduna State.

The gang was also said to have kidnapped a staff  at the Presidential Villa, Abuja and many others.

Crime Guard gathered that IGP Solomon Arase was inundated with complaints about the activities of the gang within Kaduna State, as they made the Kaduna-Abuja Road hellish for motorists.

After picking their victims, members of the gang would make them trek  for hours in a deep forest off the Abuja-Kaduna Road, before arriving their camp close to Tapher Village Kaduna State.

The gang was also said to have also raked in millions in ransom from their respective victims, creating an overwhelming sense of insecurity among residents of Kaduna State.

Arase, who was said to have been miffed by the development in Kaduna State then ordered the operatives of his elite Special Intelligence Response Team, IRT, to proceed to the State to track down the hoodlums and put an end to their activities. It was gathered that the operatives, on arriving the state gathered several intelligence from the locals for two weeks before swooping on the suspects.

Two of the suspects, Kabiru and Bello  were said to have been arrested at the naming ceremony organized by their gang leader, Shehu, at Gidan Kasimu, Mai-Yahsi Village, in Dutse-Wai Kubua Local Government area of Kaduna State who provided information that led to the arrest of other members of the gang.

During interrogations, Crime Guard gathered that the suspects confessed to crimes and they also narrated how they kidnapped their victims. Some of their victims were also able to identify the suspects.

I am Aliyu Haruna, 30-years-old and I am a  Fulani by tribe. I was born in Kastina State but I grew up in Sabo Gayan area of Kaduna State.  I attended Alamajiri  school at Gidan Abdulmumuni, Sabo Gayan Village.  I am a famer, I rear cattle and I am also a commercial motorcycle operator. I am married and we are blessed with three children.  I have about 10 cows.

But on the 24th of April 2016, I was arrested by some policemen from Abuja at a naming ceremony at Gidan Kasimu, in Mai Yahsi Village,  in Dutse-Wai Kubua Local Government area of Kaduna State.

The naming ceremony was organized by one of our gang leaders, Kasimu Shehu, aka Babajo. I joined the gang of kidnappers some time in April 2016, and we are six members in that gang. The other members are Shehu,  Musa, Yakil, Aliu and Bashiru.

We have one Ak 47 rifle that is always in the possession of our gang leader Kasimu Shehu.

Some time in April, Shehu called me and said I should bring food for them, that they had kidnapped one man Auden in Jangwan village off  Kaduna-Abuja Expressway. I saw Shehu with AK 47 rifle in the bush when I went to deliver the food to him. I used my motorcycle to deliver the food to them inside the bush.  Shehu promised to pay me N200,000 once the ransom  has been paid, but I was given just N1000 when I delivered the food.

I know I have committed a crime. One of us, Mohammedu Maman, a cousin to Kasimu Shehu is our gang member, his duty is to guard the hostages in the camp. He was the one who guarded one Nassarawa State indigene in the camp when he was kidnapped.

I am Aliyu Haruna, 30 years-old, a Fulani by tribe and a native of Kaduna State. I am married to two wives  and I have five children.  I had Alamajiri Education and I work as a security guard at a satchet water company on Yakowa Way Kaduna State.  I am also into land business with my friend Sani.

I joined this kidnap gang last year and we are six members in the group. Members of the gang are, Kasimu Shehu who is our leader; Bashiru, Yaki, Musa, Bello and myself.

On April 14, 2016, I, Shehu, Bello, Musa, Yakub and Bashiru went to Audu Jagwan with one Ak47 rifle to kidnap a staff at the Presidential Villa. We found him praying along the road and we ordered him to follow us at gun point into the bush. I don’t know the person who gave Shehu the information about the man but we got a ransom of N1million before the man was released.  I got N200,000 as my share and the only role I played was to escort the man to the camp where he was kept.

I am Kasimu Shehu, 27-year-old, a Fulani by tribe and a native of  Mai-Yahsi Village in  Dutse-Wai Kubua Local Government Area of Kaduna State.

I attended an Alamajiri School at Peleke-Tasher Tsamya Village, Zaria, Kaduna State. I am married to two wives and I am blessed with two children. I have over 40 cows at Audu Jangwan Village along the Abuja- kaduna Road. I am not part of the kidnap gang as my friends; Aliyu Haruna, and Hassan Bello alleged. I am not the leader of any kidnap gang. I was not involved in the kidnap of the pastors or a staff of the presidency as alleged. I don’t have an Ak47 rifle as alleged but I have a locally made gun which I bought for N600,000 from one late old man who lived in Kauran Wali-Makarfi Local Government Area of Kaduna State.  I am using the gun to protect my cows though I don’t have a license for the gun.

The locally made gun is with one Mathew for repair at Tunga Sabo Village, Rigina, Kaduna State”.

Rev.  Yakubu Dzarma  “I am Rev,Yakubu Dzarmaý , I am 63-year-old and I am a native Kaduna state.  On march 21, 2016,   myself, Reverend  Emmanuel and Ilia Anto, went to a clear the church site for a seminary school around 4pm and  when we were done with the clearing and were about to enter into our vehicles, a Toyota Highlander SUV and a Sienna saloon car, some hoodlums who were all armed with AK47 rifles surrounded us and ordered us to surrender all our valuables including cash .

They collected from me N64,00 cash, my Techno Phone valued at 78,000 and my shoe, valued at N20,000  and they ordered us into the bush and we started trekking.  One hour after we’ve trekked a very long distance, one of our pastors Ilia Anto, who was sick told them that he could not go any further and he complained about his health. They started beating him and when they saw that he wasn’t ready to move again, they left him but used his phone to call his last dialed number and gave the person the location where to find pastor Anto and we then continued trekking.  24 hours later we got to their camp.

They have four camps within the area. Each camp contains nothing less than ten men all armed with AK47 rifles. The next day they used my cell phone to call my wife and gave her three numbers she should call.  They gave us five days to pay the ransom or they would kill us but we stayed with them for nine days before a ransom of N4million was paid to them.

They shot indiscriminately into the air while we were all at the camp.  We also left four kidnaped women in the camp, one of whom was pregnant. I can confidently identify one of the suspects arrested by the IRT Operatives  and his name is Kasimu Shehu. Muhammed Dan Azumi I am Muhammed Dan Azumi, 40-year-old.  I am a civil servant and a native of Nasarawa State. On April 14, 2016, around 5:30pm, I was with my wife and one other woman, Hajara , praying at Audu Jangwan and after a while some hoodlums came out of nowhere and surrounded us.  They took my wife and asked her to go because she was eight months pregnant. The  hoodlums then ordered Hajara and I into the bush, but on our way one of them took Hajara on a bike to the camp. They were six gang members with one Ak47, machete  and sticks.

They claimed to be Boko Haram  and we trekked with them for 18 hours inside the bush before we got to an uncomeplted building that was used as their camp.  When we arrived they asked me and Hajara to cooperate with them or they would kill us.  They demanded N10million as ransom but after serious  negotiation it was reduced to N3million, but they later collected N1 million from my boss before  Hajara and I  were released after three days in the bush with them. They also collected the sum of N20000 that was with me when I was kidnapped whilebthey inflicted a deep cut injury on my head.  When I heard that the hoodlums had been arrested I went to Metro Police Station Kaduna, though it was night but they brought the suspects to me and I was able to identify Haruna Aliyu, aka Yellow “

Meanwhile, the  Police Force Public Relation, Olabisi Kolawole, while confirming the arrest said the  kidnappers, who had been terrorizing Kaduna and Zaria areas of Kaduna State will soon be arraigned in court. She added that the arrest of the kidnappers was an indication of the commitment of the Nigeria  Police Force to the fight against all forms of crimes and criminality in the country.

According to her, “the IGP while commending the Force Intelligence Response Team (IRT) and other Police operatives involved in the arrest of the suspects for their dedication and professionalism,  efforts are ongoing to apprehend the fleeing members of the gang.

The Inspector-General of Police also appealed to the citizens to support the Nigeria Police Force by providing useful information that could help in unmasking the criminal elements in the country.”