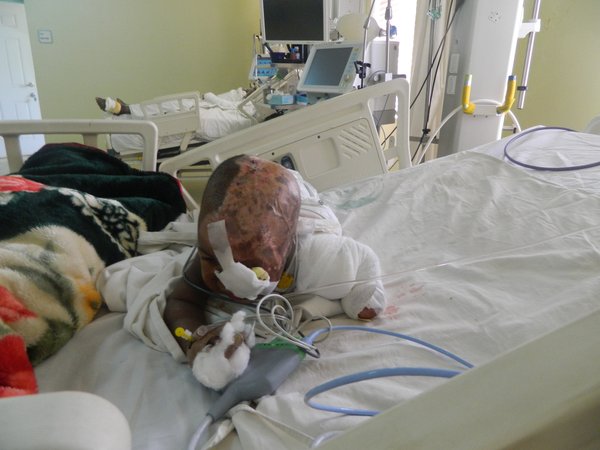 Local and international plastic surgeons carried out a successful reconstructive surgery on Baby Aishat Ibrahim, the victim of a Boko Haram bomb explosion earlier this year, whose predicament caught the attention of the Vice President, Prof. Yemi Osinbajo, during a visit to Borno State July 1 this year.

Speaking with the press yesterday at the National Hospital, Abuja, after the Vice President paid an unscheduled visit to check on the recovery status of the baby who was operated upon early on Saturday, Prof. Ferdinand Ofodile, the US-based surgeon who led the 4-hour surgery said the operation was very successful, although the recovery will take a while.

According to him “we reconstructed her eyelids by adding flesh from the thigh, and we also did a skin graft to the left arm, freeing it, from its attachment at the armpit caused by the explosion.”

He said Aishat who is now 14-months old sustained extensive burns to the eye, the face and the chest. She also sustained injuries in the left arm and armpit “resulting in the arm being fixed to the body and eyelids destroyed.”

Ofodile who is an Emeritus Professor of Medicine from the top-rated Columbia University, New York said it would take about 6 months for Aishat’s full recovery, but explained that if the eyelids were not reconstructed it could cause the outright loss of the eyes.

“When I saw her on Friday, the upper lid was turned inside out. If this was not fixed, over time the eye itself would be lost due to unprotected exposure. So we saved the eyelids and globe by adding skin to the eye lids-upper and lower,” Ofodile who led two other surgeons, Dr. Chubado Tahir from the University of Maiduguri Teaching Hospital, where the VP met the baby for the first time in July and Dr. Cefas Nbaya of the National Hospital, Abuja.

Also, the US-based surgeon the team “”released the armpit so Aishat can lift up her left arm and recover the full use of her shoulder.” He said further surgical operations would be done in the future to improve the baby’s conditions.

Aishat’s parents, Mr. & Mrs. Ibrahim Goni Lawani who also spoke with the press yesterday at the Hospital were full of thanks to President Muhammadu Buhari and also Vice President Osinbajo who personally covered the costs of the operation.

Lawani said out of the many victims of Boko Haram, his family is privileged that “God touched the Vice President to help our child. We thank President Buhari and the VP, may God bless them and make them remained focussed on why God brought them to power.”

According to Aishat’s mother, Mariam, “we are happy and relieved, the surgery went well.”