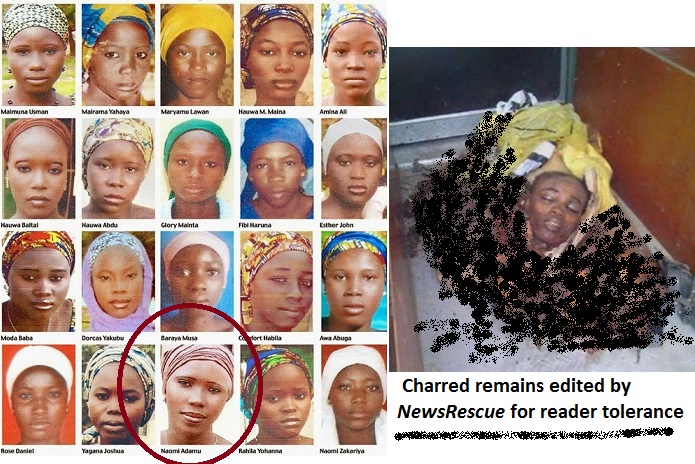 The Kano suicide bomber looks startlingly like Naomi Adamu, one of the 234 girls abducted by Boko Haram from Chibok in April this year. Naomi’s parents are strongly advised to head to Kano to see if it is their daughter and claim her remains if it is. 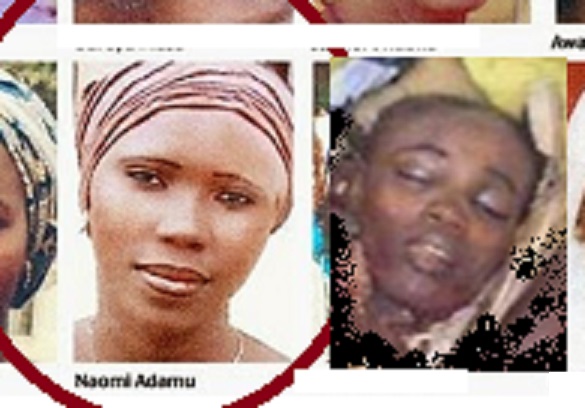 Xan Go, a NewsRescue member discovered this. He said: “I gathered from some victims affected by the bomb blast that most of the suicide bombers are non-Hausa/Kanuri teenagers according to their accent. From that time I started telling people about my suspicion that these girls must be Chibok girls. So some of my friends started comparing the picture of one suicide bomber with the photographs of Chibok girls. Eventually they discovered Naomi has a perfect match with the dead bomber.”

We cannot verify it is her. The image of the Kano bomber which we used was obtained from AfricanSpotlight.com, posted on July 30th 2014. We cannot also verify the image, though at the time it was posted it was not related in any way and realized to bear resemblance to the Chiok girl, which in a way proves honesty and authenticity. [Raw image: WARNING!]

Further more from our analysis, her eye lids are puffy and shiny as happens with the dead. Her face is emaciated, she has lost weight when compared to her original photo which proves it is not a photo-shop and is likely the same person who has not been eating well in Sambisa forest. The positioning of the face, its orientation is also totally different which clearly indicates it is not a Photoshop of her original photo. Her eyebrows have grown since captivity as they are now more bushy, which goes along with no usual grooming. NewsRescue verdict is that this is likely her and this is the sad reality in Nigeria.

Th second suicide bomber who operated in Kano the same day should also be investigated for Chibok identity.

A well known activist, Dr. Peregrino Brimah had in a 100-day after abduction tale, described how the Chibok girls were likely to be so frustrated with Nigeria, they will easily be brainwashed to become suicide bombers, especially with force and the use of heroin, a Boko Haram common drug. He later described the fate of the Chibok girls abandoned by the Nigerian government as “worse than dead.”

Nigerian security services are not very helpful and trustworthy; they are yet to affirm or deny.

An excerpt from Dr. Brimah’s capturing article of July 23rd:

By the sixth ten days, we were angry. These were the angry days. These were the bitter days. By these ten days, something had changed. We hated the world, we hated ourselves. Some of us asked to be taken on terror missions. Some of us wanted to go out and kill. We had completely lost faith in ourselves and in the world around us. Some of us still had faith in God, but frankly, some of us just did not any more. Our captors saw this in us. They commented that we had become more deadly than them. Our conversations were cold. We laughed when they talked about their campaigns of carnage. We discussed life with them; we discussed their plans with them. We discussed death with them.

By the ninth ten days, bellies could be seen protruding with bulges of fetuses. There was harmony in the camp. We had settled. We now thought again of the world outside us. By the ninth ten days, we spent a lot of time praying for our parents. We spent a lot of time praying for you. We felt empathy… no, pity actually for you in the world outside. You see, our fate was pretty simply laid out. We had done what we could, considering our predicament. We had been brave and fought the terrorists; some of us were killed trying. We had negotiated with them. Our destiny was determined, harsh, but circumscribed. But how are you? How is your world? Your world full of wickedness, corruption and politics. How do you sleep at night? By these ninth ten days, we wished not to return to your wicked world – a world where you could abandon your children in the forests with very very bad men and were able to sleep at night, able to go to work the next mooring, to eat, drink, have sex, laugh and play, purchase nonsenses: a world where you could do and did nothing; a world where you could feel and felt nothing; a world where you could choose and chose nothing. You made these men. You made this world. You created this terror and you left it this way, afraid, unable or unwilling to do anything about it. Boko Haram was your reward. We felt empathy for you, who could live with yourselves knowing what you had created and that you failed for 90 days to come here and fight or die fighting to rescue your children. In these ten days we prayed for you and for Boko Haram. We prayed for the world.