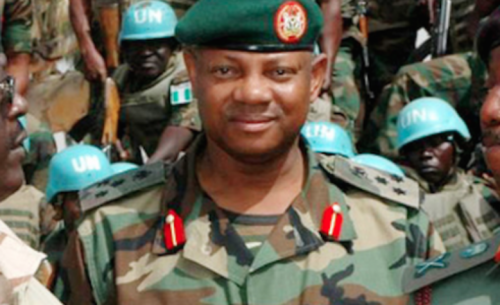 Facts have begun to emerge on how the Coordinator of the Presidential Amnesty Programme (PAP) and Special Adviser to the President on Niger Delta Affairs, Brigadier-General Paul Boroh (rtd), has been deceiving the people and allegedly amassing wealth from the PAP to the detriment of the region.

It would be recalled that a few days ago at a meeting in Abuja, Mr. Boroh informed some elders of the Niger Delta that 70 ex-militants, who, as part of the PAP, had been trained in underwater welding at the CDA Technical Institute of the West Indies in St. Kitts and Nevis, recently graduated and returned to Nigeria.

But an investigation by SaharaReporters has revealed that Mr. Boroh lied, as none of the ex-militants have returned from St. Kitts and Nevis. Furthermore, 50, not 70, ex-militants were discovered to have participated in the vocational training program sponsored by the PAP.

In a telephone interview with SaharaReporters, some of the stranded ex-militants at St. Kitts and Nevis disclosed that for about three months, they have been stranded, saying that they were all shocked a few days ago when they read an article from Sun Newspaper online in which the amnesty coordinator had told some elders of the region that 70 of them who went for the training had all returned to Nigeria fully equipped.

According to them, they are not 70, but 50 delegates, and none were provided with equipment, as stated by Mr. Boroh. They added that the amnesty office, the contractor and others who have been conspiring to defraud the country have raped Nigeria of about $700,000 in school fees from the non-existent 20 delegates.

“We the 50 ex-militants to the St. Kitts and Nevis arrived on December 26, 2015 due to some delays and here in St. Kitts and Nevis we spent over a month before we commenced the training on the 8th of February, 2016 and our program ended in July. Since then till date, we have been stranded and abandoned here with no food. Since July till date, none of us has gotten a single monthly stipend, even though we were each approved for a $500 stipend.

“Even the certificates issued to us just last week were not completed because our country has not done the needful. Barely a few months after Boroh was appointed, he has amassed wealth, defrauding the federal government billions of naira. Even N3 million for each ex-militant’s kits and equipment for the training were never given to us. Now, Boroh is pocketing a whopping sum of $700,000 in school fees for his ghost 20 ex-militants that he has fraudulently bloated to 70 delegates,” one of the ex-militants said.

Another stranded ex-militant who spoke with SaharaReporters disclosed that one Mr. Agama, owner of the firm Allstates Travel and Tour Limited and contractor handling the amnesty program, and one Mr. Lambert in the amnesty office in Abuja have continued to issue threats to the ex-militants in an effort to keep them quiet.

“We are dying here, journalist. Please help us with your pen. We have been abandoned here by the federal government and the amnesty coordinator [Boroh]. I can confirm to you now that as we are talking we the stranded 50 ex-militants here in St. Kitts and Nevis have hired the services of a lawyer in Nigeria who has written a series of petitions to relevant authorities about our plights,” the ex-militant cried out.

A petition against the amnesty office and the contractor, addressed to the Office of President Muhammadu Buhari, the chairman of the Economic and Financial Crimes Commission (EFCC) and other relevant authorities and signed by the counsel to the stranded 50 ex-militants, S. Kelechi Nnadi, called for the immediate evacuation of the trainees and the prosecution of all those involved in the fraudulent and corrupt act.

The petition titled, “Sabotage Of The Amnesty Programme Of The Federal Government Of Nigeria, Fraudulent Conversion Of Money Earmarked For Training Of Amnesty Training/Delegates In St. Kitts and Nevis (West Indies) By Allstates Travel And Tours Ltd And Their Cohorts In The Amnesty Office,” noted that the program was intended to last a year but was fraudulently shortened to six months.

“Indeed, funds were adequately provided for the said training of the 50 ex-militants which was scheduled to last for a period of one year. However, contrary to the clear stipulations contained in the contract papers, the trainees were enrolled for only six months rather than the one-year training agreed upon. The entire package for the training, including payment of monthly stipends of $500 per person, feeding, accommodation, tuition, certificate cost, transportation, medicals, etc., was made available to the contractor.

“A preliminary check at the amnesty office in Abuja clearly reveals that there exists some level of conspiracy between some officials of the amnesty office and the contractor to corruptly enrich themselves. And the amnesty office, through one Mr. Lambert, has continued to issue all manners of threats to the 50 ex-militants, our clients, to use the Nigerian soldiers to shoot them upon their arrival to Nigeria and also delist their names from any payroll, for agitating for their entitlements in the amnesty package as approved by the federal government during their training in St. Kitts and Nevis,” Mr. Nnadi stated.

The petition further stressed that apart from the international and diplomatic embarrassment the situation is already causing the country and the entire West Indies, the sincerity of the federal government and the presidency in its commitment to the amnesty program in the Niger Delta is also called to question should the felons be allowed to retain their looted wealth.

As at the time of filing this report, all efforts to reach the Coordinator of the Presidential Amnesty Programme and Special Adviser to the President on Niger Delta, Paul Boroh, proved abortive.