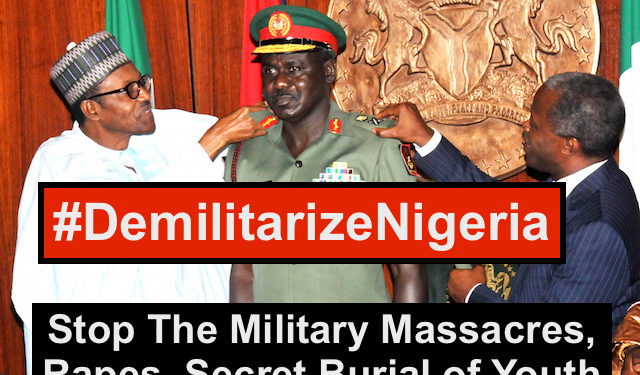 By extending the tenure of the serially implicated army chief Tukur Yusuf Buratai, Nigeria’s president Muhammadu Buhari can no longer be excused from culpability in some of the most horrendous crimes against humanity and God in recent human history. While perhaps Buhari may have been described as weak for not sacking, detaining and probing the army chief for the various massacres he stands accused of and his Dubai properties and other procurement and military funds misappropriation scandals, by extending his tenure, Buhari has clearly positively appraised the blood-of-the-innocents soaked army chief and endorsed his corruption allegations and massacre record.

Regardless of religious inclination, the massacre and secret mass burial of hundreds of minority, mostly so-called ‘Shia’ Muslims in Zaria during December of 2015 cannot be excused. Buhari himself said that there was no excuse for a massacre of such proportions during his only media chat as president, which happened to be two weeks after the massacre. See: https://youtu.be/k6ncKD4JdKk

A Muslim narration purportedly by Ibn ‘Abbas goes: The Prophet sent Mu’adh to Yemen and said, “Be afraid, from the curse of the oppressed as there is no screen between his invocation and Allah.” (Bukhari) Buhari should undoubtedly be very afraid by endorsing this monumental level of murder and oppression of the living, the dying and the dead.

Whether one is so conscience-dead and he agrees with the massacre of the protesting youth the fateful days of December 12th to the 14th two years ago, by an army that has no legal jurisdiction policing the streets and was at the time posted to Maiduguri barracks, there is no human who can defend the follow-up mass secret burial of the dead and dying that the Nigerian military with the Kaduna state government perpetrated as admitted by the Kaduna government. [See: http://www.newsweek.com/nigeria-347-shiites-buried-mass-grave-inquiry-told-446703] Only ISIS and Boko Haram are known to engage in such unconscionable mass burials with no regard for the dead and dying victims and their families. Buhari has double endorsed this behavour and the continued persecution of the people, many, since remaining locked in jail in flaunt of court orders for their release, including women like Zeenat Zakzaky.

Two years later, the chief of army has not yet punished a single officer responsible for that massacre event in spite of a Buhari-ordained state probe which indicted certain officers like General Adeniyi Oyebade – who has since rather been promoted. Rather an emboldened army chief has gone ahead to engage in several similar, albeit smaller scale massacres with follow-up secret burials including the Onitsha Igbo massacre of 2016 and the Kwara massacre of protesting students this November. [See: https://www.premiumtimesng.com/investigationspecial-reports/205176-special-report-onitsha-massacre-pro-biafra-supporters-coordinated-sss-operative.html]

With the latest rather typical incredulous withdrawal of $1 billion to “bribe” the army ahead of the 2019 elections under the guise of fighting the already announced “defeated” Boko Haram, Buhari is not only appraising the corruption and murder-indicted army chief, but appeasing him. We the people are left no recourse than to continue to fight to #DemilitarizeNigeria and for #Justice4Kwara5 and freedom of Zakzaky and his beautiful wife Zeenat; and justice for the victims of the #OnitshaMassacre, #AbiaMassacre, #UmuahiaMassacre and #MilitaryMassacresXYZ!