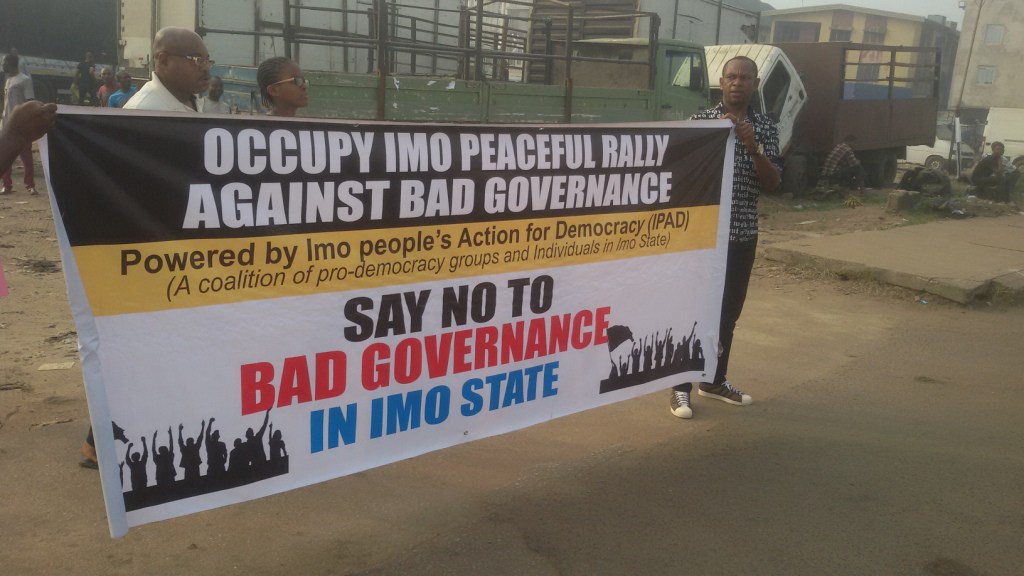 The police in Imo State on Monday said its officials dispersed protesters on a peaceful march against Governor Rochas Okorocha’s administration because they did not get the permission of the police to carry out the march.

The protesters were allegedly attacked along Wethral road, Owerri, the Imo State capital by a detachment of police officers as they commenced the march.

The protest, tagged ‘Occupy Owerri’, which is expected to last for one week, was called by Imo People’s Action for Democracy, IPAD, against the policies of the Governor Okorocha administration.

Chief among the grouse of the protesters is the erection of statues in Owerri, the state capital, costing millions of naira, when the state is still owing workers’ salaries and pensions.

They are also opposed to the appointment of the governor’s sister as Commissioner for Happiness and Purpose Fulfilment.

The group had written to the police and the State Security Service for security during the rally.

While the SSS gave approval for the rally to hold, the police asked that the rally be shifted till after the yuletide period.

But the group refused, arguing that the police have no right to stop it from protesting.

The Police Commissioner in the state, Chris Ezike, could not be reached for comment on the alleged attack on the protesters by his officers.

He first picked his call and after our reporter introduced himself and newspaper, he cut the call and refused to pick subsequent calls placed to his phone.

But the spokesperson of the command, Andrew Enwerem, said the protesters did not have the permission to protest.

“The duty of Police is to ensure security of lives and property, if they found themselves in friction with Police that is not out of place.”

“Teargas is meant for human beings and not meant for animals. Before you protest you must get permission to March otherwise that will amount to unlawful assembly,” the spokesman said.

In a statement on Monday by the coordinator, Aku Obidinma, the group said its members were attacked by police as they commenced the rally along Wethral Road Owerri.

“We peacefully commenced our protest this morning from Wethral Road Roundabout in Owerri, Imo State, and were accosted by heavily armed policemen who demanded we stop because the commissioner of police did not approve the rally”

“We insisted that we must continue since the law did not say we needed his permission before we could embark on a peaceful protest. As we continued our match, the police descended on us and started beating up the protesters, firing tear gas, confiscated our placards and manhandled even the minors amongst us.”

Continuing the group said, “We wish to inform the world that Imo State has unfortunately become a fascist state where freedom of expression and assembly is no longer guaranteed.”

“We say this because of the ugly incident that happened this morning where the Imo State government used the police to brutally attack peaceful protesters.”

“Today is really a sad day for our democracy. Imo State has been turned into a terror zone. Governor Rochas Okorocha is now a full-blown dictator and he has as his accomplice the Imo State Police Commissioner, Mr. Chris Ezike, who is always ready to do his dirty jobs.”

They vowed that no amount of intimidation will make them drop their agitation for good governance in Imo State.

“We will in no distant time mobilise Imolites for a massive protest that will bring the government to its knees,” the coordinator said.

“We use this medium to call on the police authorities and the Presidency to quickly redeploy the Imo State Police Commissioner out of Imo State as he has lost the confidence of the people of the state,” he added.