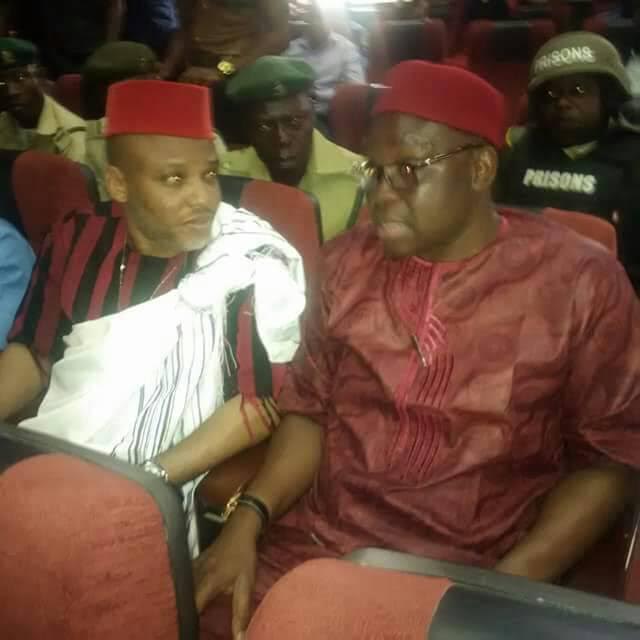 President Buhari breathed legitimacy into every agitation for secession in the South East and South South regions of Nigeria when he promised to favour those who voted him en masse ahead of those that didn’t shortly after assuming office. There couldn’t be a better justification than the President pledging to make them 2nd class citizens in violation of their Constitutional right to freedom of association and from being discriminated against.

The strong will of the majority of the people of both regions to remain a part of this nation especially the South East, which seemed to have waited forever to get its first non-ministerial appointment must be commended.

When Nnamdi Kanu,the arrowhead of the Indigenous People of Biafra(IPOB) was arrested at a hotel in Lagos about 2 years ago, no one would have ever thought he would step out of Kuje Prisons on bail in the manner he did. He has gone from whom many thought a semi-lunatic spewing what even a lucid him wouldn’t make any sense of on radio to a man that has had people like Prof. Charles Soludo, Pat Utomi, Peter Obi, the entire South-East governors and virtually every human rights activist call for his release. Ayo Fayose was in court on the day his bail application was being ruled on and he was dressed in red to show solidarity.The Buhari administration made a hero out of a villain.

At every point it kept denying him freedom after being granted bail from the magistrate court where he was first arraigned to the subsequent orders for same by other courts,it had more people rooting for him. For an addendum, his followers were massacred in Port Harcourt, Rivers State for doing nothing other than celebrating Donald Trump’s inauguration as U.S President.

This administration by its flagrant disregard for the rule of law, has swapped places with its adversaries in the fight between good and evil. A lot of people are starting to forget this man started a radio station with the sole aim of disuniting this nation. He distorted facts and used highly unsavory words in propagating his message of a Biafra nation. What people now see is a man oppressed by the Buhari regime and one that deserves some sympathy for his travails. What we now see is a man who is starting to garner more support from his people as his ‘oppressed’ status has pumped an air of righteousness into his struggle.

A lot of us have been calling on the government for the last 2 years to put a halt to its human right violations and abide by the dictates of the laws governing us because of the possible far-reaching consequences.

I took up this matter with the National Bar Association President in person and even suggested lawyers go as far as boycotting courts until court orders are obeyed.It amounts to double standard for a government to claim the judiciary is uncooperative in its bid to sanitize the system when it doesn’t obey the courts lay down.

The negative implications are starting to manifest and I sincerely hope they don’t spiral out of control.
With Kanu decked in the caparison of the oppressed, everything seems to be attracting sympathy to his plight and even the worst PR specialist will tell you how crucial a role sympathy can play in moulding public opinion. And in this case where the man wants to disunite Nigeria, that is most undesirable.
The stringent conditions attached to his bail last week by Justice Binta Nyako only made matters worse as it only sprang up conspiracy theories of the government interfering to ensure he stays under lock and key. That a man granted bail for the purpose of seeking proper medical care would be required to produce a jewish high priest, ‘someone as highly placed’ as a Senator and someone who owns a property in Abuja as sureties to deposit N100M each is ridiculous. It is despicably sad that the conditions didn’t reflect the dire need to allow him go and look after his health and if not for the compassion the authorities had managed to spring up on his behalf,the man could quite easily have been still locked up in his ill state.

Word is the South East Caucus of the Senate met in a bid to help perfect his bail conditions and that tells you the extent to which Kanu’s popularity has soared. He has come a long way from someone whose cause didn’t seem likely to spread any farther than the container his radio station was transmitting from to having the system justify that cause with its excrescences. The villain has become a hero.