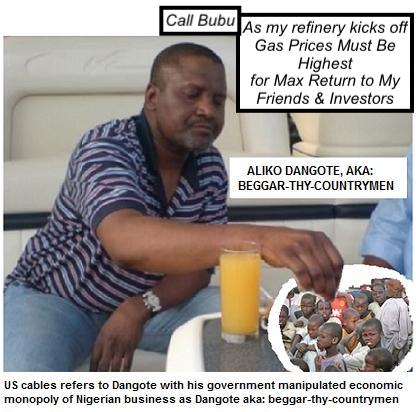 The Nigerian government, led by President Buhari and the ruling APC party, is once again involved in a nefarious scheme to increase gas pump prices in the country a month before the launch of Aliko Dangote’s oil refinery. This move, which which follows the same model dubbed by a Wikileaks expose as a “beggar-thy-countrymen” model, is being seen as a blatant attempt to help Dangote stuff his and his cronies’ pockets in his life of eternal government-ensured and enforced monopolies.

Dangote has been using his longstanding political connections to take entire sectors of Nigeria’s economy captive at literal gunpoint using state power. He is getting rich by government-ordained monopolies while making Nigerians poorer.

This is not the first time that Dangote has been accused of such practices. In 2021, as exposed by David Hundeyin in News Wire, he proposed a ban on refined petroleum importation and also proposed that in the event that local refining doesn’t satisfy consumption, he should also get the SOLE LICENSE to import petrol to Nigeria.

That move in 2021 was widely criticized as an attempt to kidnap the entire country’s energy market and gift wrap it to a robber baron, as it was noted that it will set a precedent for Dangote to monopolize other sectors of the Nigerian economy, such as telecommunications, digital satellite TV, and vehicle manufacturing and make the thirsty cabal literally own Nigeria, if he doesn’t already.

Nigerians have taken to social media to voice their outrage at this revelation. Many have called for the government to take action against Dangote and his monopolistic practices. Some have even called for a boycott of Dangote’s products and services.

In a statement, the Nigerian government has denied any involvement in the scheme.

This scandal has once again brought to light the issue of corruption in Nigeria and the need for stricter regulations to prevent monopolies from taking over the country’s economy. It is now up to the Nigerian people to demand accountability from their government and ensure that their rights and interests are protected.