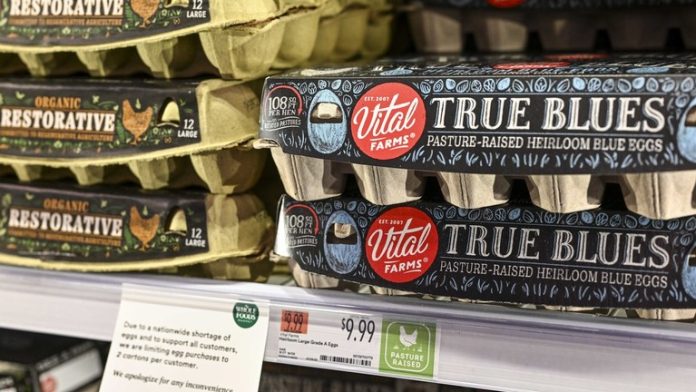 Officials with US Customs and Border Protection have warned Americans against attempting to smuggle raw eggs or poultry into the country from Mexico, citing the risk of disease, as skyrocketing supermarket prices drive otherwise law-abiding citizens to take extreme measures.

In the same three-month period in 2022, the average price of a dozen eggs in the United States increased from $3.50 to $5.30. According to the NBC affiliate, a customer can get 30 eggs for $3.40 across the border in Juarez – a steal as long as one isn’t caught.

Payne warned would-be egg smugglers that they would face civil penalties if they tried to save money on groceries, with fines for failing to declare personal-use amounts averaging around $300. While the San Diego Field Office warned of “penalties of up to $10,000” for “failure to declare agricultural items,” Payne clarified that the higher fines are for “undeclared illegal commercial shipments.”

While near-record inflation has driven up grocery prices across the United States, the Department of Agriculture’s Economic Research Service also blames the price increases on Highly Pathogenic Avian Influenza, a new strain of bird flu. They claim that the disease will force the slaughter of 43 million egg-laying hens in 2022 alone. According to an infectious diseases expert, farmers are strongly encouraged to destroy their entire flocks upon mere suspicion of virus exposure, which means millions of healthy chickens were also culled.

Farm Action, an industry group, has asked the Federal Trade Commission to investigate egg companies’ profits, accusing top US egg producer Cal-Maine of price gouging. While US egg production was down 5% in October compared to the same period in 2021, and inventories were down 29% over the 12-month period ending in December, Farm Action attorney Basel Musharbash told Fox News on Saturday that these statistics don’t explain the record-high prices.

Cal-Maine has defended its pricing, claiming that higher production and shipping costs are also factors. In the previous year, the company’s sales for the fourth quarter of 2022 increased 110%, while gross profits increased over 600%.