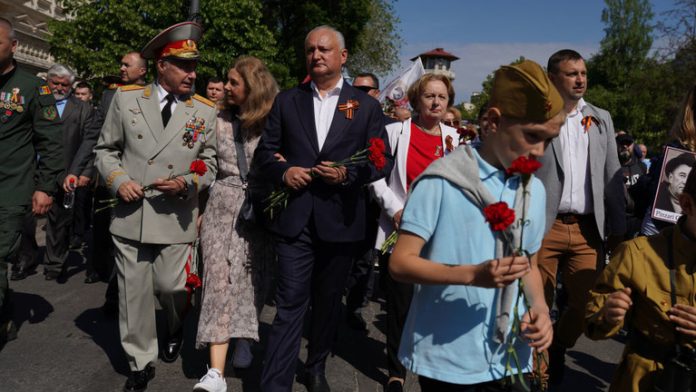 By failing to remain neutral in the conflict in neighboring Ukraine, Moldovan President Maia Sandu has put the former Soviet republic at risk of becoming “cannon fodder” in NATO’s proxy war with Russia, her predecessor said on Saturday.

“Maia Sandu continues to draw Moldova into NATO, in violation of the Constitution’s neutrality and the will of the Moldovan people, who are categorically opposed to joining this military structure,” ex-President Igor Dodon claimed in a Telegram post. He made the remarks in response to Sandu’s Friday statement that her government was seriously considering joining a “larger alliance” in the midst of Russia’s military operation in Ukraine.

Abandoning military neutrality would be “dangerous” for Moldova, according to Dodon, who was president from 2016 until Sandu defeated him in the 2020 election. The country of only 2.6 million people is consistently ranked among the poorest in Europe, and it has managed to keep a fragile peace with its breakaway Transnistria region since agreeing to a ceasefire brokered by Moscow in 1992.

Dodon stated that Sandu made her statement after meeting with Alexander Soros, son of Hungarian-born billionaire George Soros, “who brought her to power” in Davos. “Obviously, Sandu is implementing his scenario in Moldova, and joining NATO is one of his points,” he continued.

Although Moldova is not yet a member of NATO, it has worked with the Western military bloc on a number of occasions, including sending peacekeeping troops to Kosovo. Moldovan Foreign Minister Nicu Popescu attended a NATO summit in Bucharest last November, the first time Chisinau dispatched a representative to the organization. Popescu reportedly stated at the time that joining NATO was out of the question due to the neutrality provision in Moldova’s Constitution.

Sandu appears to be changing his stance “on the orders of overseas masters, against the interests of the country and the people, against Moldova’s sovereignty and territorial integrity,” according to Dodon. “As evidenced by the results of numerous public opinion polls, our citizens want to maintain neutrality and peace, and they will never agree to become cannon fodder for NATO in the fight against Russia.”