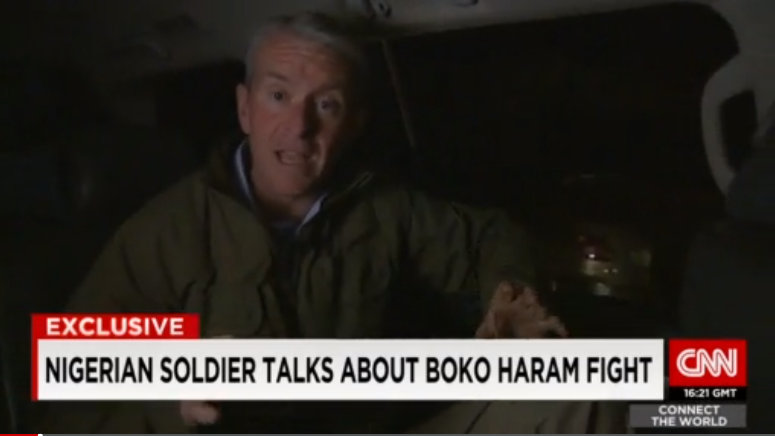 Northern Nigeria (CNN) I didn’t want to ask the question. I could already guess the pain behind the answer.

“Do you think your husband is dead?”

“I don’t know… I pray to God to give him another chance,” she finally manages to stutter.

Her sadness is heavy and blankets both of us.

She tells me she has three children, and they last saw their father four months ago when he went back to his army unit on the front line in Nigeria’s battle with the radical Islamist extremist group Boko Haram.

His friends last saw him bloodied and shooting as Boko Haram fighters advanced and they all fled.

If all this wasn’t trauma enough, the young woman says the army has deserted her, too.

“They didn’t tell me anything, they still haven’t told me what happened and they didn’t pay me anything and no one is feeding us in the barracks,” she said.

We are in northern Nigeria, a few hours’ drive north of the capital where the mostly Muslim north meets the mostly Christian south.

#IamNigeria @CNN Nigerian citizens pump their own water, generate their own power, thus unsurprising that soldiers buy their own kit #GEJOut

Driving northeast of here toward the borders with Chad, Cameroon and Niger puts you in the heart of Boko Haram territory — a land mass the size of Belgium.

So it’s no surprise that the area is home to many thousands of troops, and, as I am finding out, it’s also the backdrop of many more heart-wrenching stories.

A mile or so from his base, I meet a soldier on a remote windswept hill. He is a veteran of African Union and United Nations peacekeeping missions in Liberia and Sudan, a professional soldier. We sit on plastic chairs as he tells me his story.

He, too, was left on the battlefield by his comrades as they fled for safety in the face of a Boko Haram attack. He doesn’t blame them.

“The major problem the soldiers have is they don’t have the equipment to fight,” he says.

Boko Haram has anti-aircraft guns, which he says are accurate up to three-quarters of a mile. All the Nigerian military has, he says, are AK47 small machine guns, accurate up to a few hundred meters.

Often the Nigerian soldiers are given only 60 bullets each, so they quickly run out. Boko Haram, he says, has large supplies of ammunition and more fighters.

Although the Nigerian soldiers do win some fights, he says they are regularly forced to turn tail and run for their lives by the sheer volume of gunfire from Boko Haram fighters.

It took him three days — on foot, alone — to get back to his base, 70 kilometers away. When he arrived, his wife told him to quit the army, but his troubles were only just beginning.

Army medics refused to pay the $200 for medicine to treat his injuries. Morale in the army is sinking, he says.

That night, I meet a young officer, who, like the other soldier, is not authorized to talk to me. Our conversation is held in a hurry in a tiny darkened hut that sells biscuits and fizzy drinks at a roundabout on the outskirts of a town.

Corruption, he tells me, is the root of the Nigerian military’s problem.

“Not just the generals… everybody in the country wants to get rich by any means necessary,” he says.

The soldiers don’t ever benefit from the billions allocated to the defense budget, he explains. He even had to buy his own uniform.

“The troop morale is actually very low, very low, because we are not issued a uniform, we buy the uniforms ourselves,” he explained.

The other soldier I met on the hill told me this, too. When they go into battle, no one has the same uniform, so when they run from Boko Haram it’s chaos. They don’t know who is friend or foe — whom to shoot and whom to help.

Most soldiers live in fear, the young officer tells me. A fear of what will happen to them, and how long they can survive in this battle, he says.

The worrying doesn’t stop there. They see enough war widows on the base to know the grim reality of what can happen to their loved ones if they die.

A widow I meet explains. Her husband was killed in battle over a year ago, she tells me.

“When my husband died, they never called me to tell me that I lost my husband,” she says. “They buried him without notifying me.”

She gets no army pension, and she says there are many more like her: they feel abandoned, afraid to speak out because they still live in the barracks.

Government officials tell us they will look into these shortcomings, that they are working on getting better weapons for the troops.

If they do, according to the soldiers I met, it will easily turn the tide in this war.