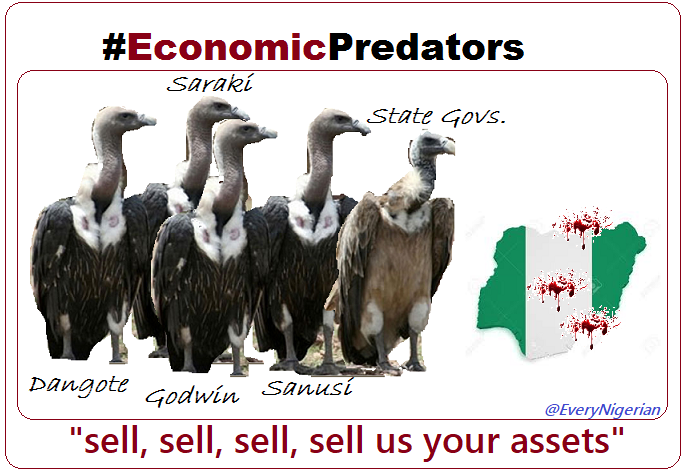 When we rejected Jonathan’s sale of Nigeria’s assets, it was on a simple premise: if you are not competent enough to lead based on your inadequacies or those of your appointees who administrate and advice cluelessly and corruptly, then you lack the authority to take major economic decisions like auction Nigeria’s prized assets. Unfortunately the premise remains thus far for the Buhari Administration.

The Buhari government has failed to demonstrate sufficiently that it has the capacity to rule aptly and intelligently and to sanitize government while putting the masses’ and natgion’s interests and survival above that of the gluttonous, vampire cabal.

The Buhari government has failed in notable obligations and promises. In handling the economy, while wasting most of its first year in a self-challenged pursuit of looted dollars which it promised will serve the economy, it has failed to provide the detailed list of named and shamed looters and the funds recovered as well as their utilization to commensurate the investment and notoriety of its priority. In almost two years, no new courts or laws were introduced as Falana has strongly advised, to make meaningful this prioritized task.

The Buhari administration has failed to prove as it promised the success of this undertaking and while attacking the indicted of the past, has failed to set and demonstrate standards. The pervasiveness of the same corruption among those in power today including chiefs of staff, the Assembly, ministers and army heads among others denies the federal government credence. Such a government has not earned the endorsement to auction assets, as likewise it can only be predicted to fail in the auction process as well as any effectiveness in the application of obtained funds.

Furthermore, the Buhari government failed to abate and actually exacerbated the economic recession by its delayed cabinet appointment and confirmation of ministers and approving the 2016 budget which effectively lost the nation one year as Bloomberg observed. Worse yet, the final approved ministerial list ended up being more political selection than pro-developmental, and with an unremarkable budget, the motivation and competence of the administration is yet to be positively appraised.

Indeed plagiarism, gross nepotism, presidential and assembly budget padding, mass murders, secret mass burials and illegal detentions, kickbacks reportedly received by chiefs of staff and nephews, tolerated estate in Dubai and Massachusetts and too many to mention, other tales of corruption and corrupt appointees within the presidency and ministries supplement this reality fact: that the Buhari “change” government does not have too many more clues and is not so much less corrupt as the PDP governments past.

One Nation Bound By the Cabal

Is auctioning Nigeria’s assets to the economic predator cabal for a paltry $15 billion at Dangote’s behest, what Buhari requested emergency powers for?

The reality is that a good government can run state treasures profitably and at fair cost to the people. However bad governments cannot. And un-certified governments that cannot run processes properly lack the credibility to be entrusted with running the more serious the process of selling assets. Today the Buhari government literally dashes cabal like Dangote billions of dollars in subsidized forex. This illegality and cabal-partiality has been and is a great part of the cause of the current recession.

The succumbing of the Buhari government to the cabal’s desire to swallow our assets are a testimony to the government’s acknowledgments that it is not remarkably better than the cluelessly corrupt governments of most of the past 30 years. Many have commented that if we must sell assets to get through a rainy day, what will happen in the future when there are no assets to be sold? And it must be realized that infrastructure built can be destroyed by terror. There is no security for whatever is provided with proceeds of sold assets. Only the cabal will gain from the sale of the assets.

Nigerians must protest against any sale of assets by this government as requested and ordered by the Dangote and his cabal pack. But if we must cabalize our national treasures as the Buhari government succumbs to the vultures who drain Nigeria dry and are now bent on harvesting its last drops of blood, we the people must protest and define our cabalization terms:

If Assets Will Be Cabalized, Then…

If Nigerians fail in their protests against the cabalization of state assets then: the federal government must retain over 50% in any sold or gifted treasure. This condition is borne on the realisation that each time an asset has been sold in the past, the cabal take advantage of the desperate masses by crippling them with the highest rates for utility or product in the world in spite of having gotten the asset for dirt cheap in corruptly skewed bids. A cursory look at the cabalization of cement plants nationwide and Nigerians being forced to pay double global prices for this essential commodity while the owners celebrate massive quarterly profits, highlights this point. 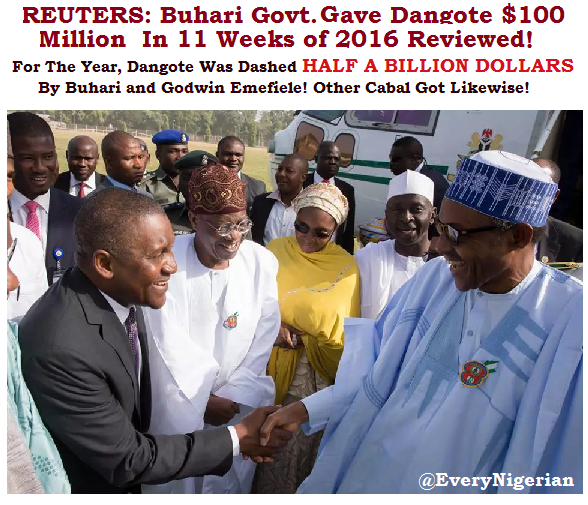 When we look at successful nations like
the UAE and China, all major industries are at best, partially privatizing with the governments owning major stock in shared assets. The benefit of this is simple: even if a government tries to regulate the final delivery price of product or service from privatized treasure, it only takes a single corrupt officer or next administration to be bribed to accept unfair price hikes. But once the government retains majority in the partially privatized companies, it can always be easily pushed to set modest rates and even if ever the rates do get exorbitant, at least the masses as co-owners will share in the profit these greedy cabal are raking from their pockets.

Additionally before any cabalization, the National assembly must be overhauled  and switched to part-time, with the senate scrapped, copying the more globally common unicameral system to save money. Security votes must be scrapped. The current ministers and central bank governor must be overhauled for inefficiency and frank corruption, and there must be decentralization of power, with Buhari’s 2011 promise of true federalism being established.

Say No To The #Cabalization of Nigeria’s Assets!