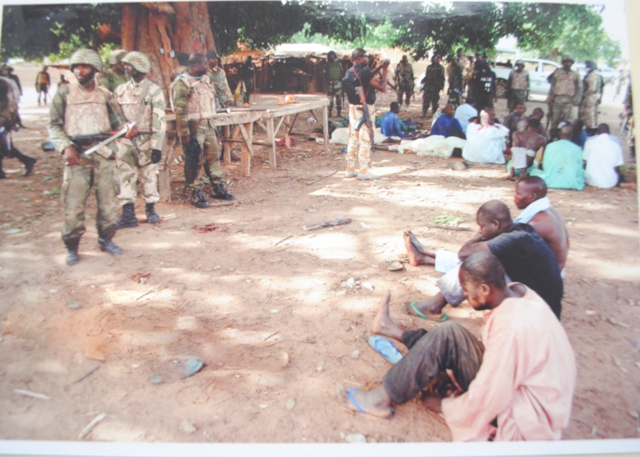 Nigeria’s Defence headquarters has said terrorists captured around the border of Lake Chad have been making useful confessions and pleading for mercy.

A statement issued by the Director Defence Information, Major General Chris Olukolade, said, scores of wounded terrorists who escaped from various camps under from fire by security forces have been captured in the fringes of Lake Chad.

General Olukolade said, “In their confessions, it was revealed that some of the camps have been disbanded following the directive of their clerics who

declared that the operation of the sect had come to an end as the mission could no longer be sustained.”

He also said the captured terrorists, some of whom are fatally wounded, are already making useful statements to interrogators of the Multi-National Joint Task Force (MNJTF).

The Defence headquarters also claimed other terrorists were captured by troops in locations around Dikwa, Cross Kauwa, Kukawa and Alargarmo.

“The terrorists, who are giving useful information as to the locations of their remnant forces, are full of apologies and pleas for their lives to be spared promising to cooperate,” Gen. Olukolade said.

He further said, interrogations confirmed that starvation was a major problem in addition to ceaseless bombardments on the camp locations even when they kept relocating.

One of the terrorists vehicles recovered by security forces

Troops have continued their assault on other locations across the states covered by the state of emergency, the Defence statement said.