Most of us never bother to determine precisely why we believe what we believe or do what we do. Why, for instance, do we celebrate Christmas? As far as Christians are concerned, we do so because we delight in Christ and rejoice in him. Christmas is a Christian tradition celebrated for centuries the world over. Surely, billions of people cannot be wrong.

However, this type of thinking is spiritually faulty. According to the scriptures, there is no safety in numbers. On the contrary, Paul counsels: “Do not be conformed to this world, but be transformed by the renewal of your mind, that by testing you may discern what is the will of God, what is good and acceptable and perfect.” (Romans 12:2).

In the scriptures, God institutes his own holy days, including the Passover, the Pentecost and the Feast of Tabernacles. (Leviticus 23). Christmas is not one of them. In God’s holy days is laid out the entirety of God’s plan of salvation. What this means is that every major move of God must coincide with one of his holy days.

For example, Solomon’s temple was dedicated during the Feast of Tabernacles. Jesus was crucified during the Passover. The Holy Spirit came down at the Pentecost. Therefore, the Jesus’ birthday cannot be on December 25 because it is not one of God’s holy days. On the contrary, it is actually the “birthday” of an idol god. Jesus must have been born on one of God’s holy days.

Christians have replaced God’s holy days with pagan holidays. This is nothing short of demonic. Most Christians are completely unaware that these ungodly changes were made. However, Daniel warned that “a little horn” from Rome will “think to change the times and laws.” (Daniel 7:25). In effect, when Christians think they are celebrating Christ, they are actually celebrating pagan gods morphed into Christendom.

Jesus chastised the Jews for “teaching as doctrines the commandment of men.” He said: “You leave the commandment of God and hold to the tradition of men.” (Mark 7:6-8). This is what is happening today. Christians celebrate heathen holidays such as Christmas and Easter in Christ’s name but according to pagan traditions; while ignoring God’s stipulated holy days such as the Passover and the Feast of Tabernacles that Jesus and his disciples observed.

Jesus says God is looking for those who will worship him in spirit and in truth. (John 4:23-24). However, everything about Christmas is idol worship. God specifically warns the Israelites not to copy the evil ways of the pagan nations whose lands they inherit. He says: “You must be especially careful not to ask, ‘How did those nations worship their gods? Shouldn’t we worship the LORD in the same way?’ No, you should not! The LORD hates the disgusting way those nations worship their gods.” (Deuteronomy 12:29-31).

However, this is precisely what has happened with Christmas celebrations. We celebrate Christmas on the same day and in exactly the same way that pagans celebrate their gods. As a result, we fall into the same transgressions as the Israelites of old of whom it is said in the scriptures: “They feared the LORD, and served their own gods, after the manner of the nations whom they carried away from there.” (2 Kings 17:33). 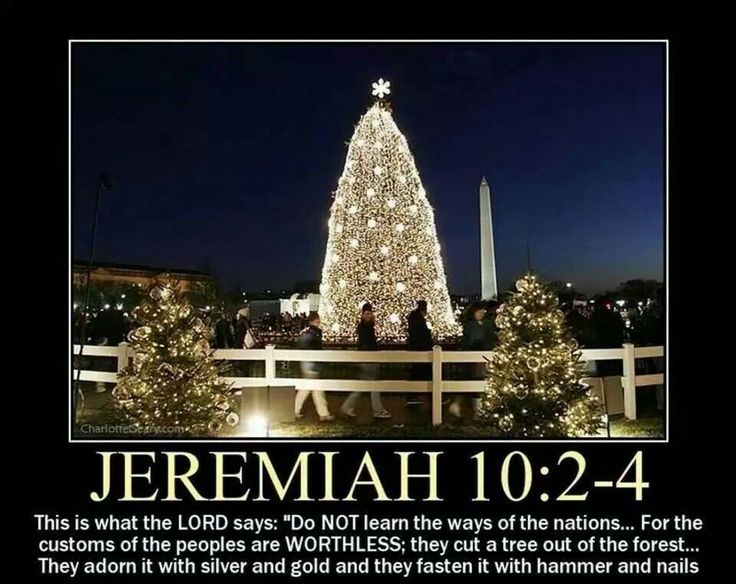 A lot of the paraphernalia we associate with Christmas is of pagan origin. December 25th could not have been Jesus’ birthday because shepherds would not feed their flock outside at night in the dead of winter. That date was preferred as Jesus’ birthday by the Church of Rome because it coincided with the pagan festival of Saturnalia.

The evergreen Christmas tree is a phallic symbol in fertility worship. The burning of yule logs, said to be sacred in Teutonic nature and sun worship, became part of the so-called “yule-tide season” of Christmas.

The holly and mistletoe traditionally hung on doorways at Christmas are part of the same fertility ritual. The red holly symbolises the menstrual blood of Diana; the “Queen of heaven.” The white berries of the mistletoe represent the semen of the sun god. Those who kiss under them invoke the powers of fertility by causing the spirits of these idol gods to come into them.

The word of God is truth; but Father Christmas or Santa Claus, who lives in the North Pole and fills his sled with toys for children on Christmas Eve, is one big lie. According to Langer’s Encyclopedia of World History, “Santa” was a common name for Nimrod throughout Asia Minor. Like the fabled Father Christmas, he was the fire god believed to come down the chimneys of ancient pagans, and to whom their children were sacrificed.

“Old Nick” is actually the nickname of the devil. This has been camouflaged into “Saint Nicholas.” “Nikos” means conqueror or destroyer. In Revelation 2:6/15, Jesus says he hates the works of the “Nicolaitans;” which refers to the followers of Nicholas.

Christians believe Christmas gift-giving comes down from three kings of the Orient who brought gifts for the baby Jesus. However, the biblical “wise men” were not kings. The bible never specified their number. They did not come at Jesus’ birth but two years later. Moreover, they never exchanged gifts. They only had gifts for the young Jesus.

Exchanging gifts is not Christian. Jesus teaches that we should: “do good, and lend, hoping for nothing in return.” (Luke 6:35). Moreover, we are only to give to the poor. Solomon warns that: “he who gives to the rich, only to come to poverty.” (Proverbs 22:16). It is under the antichrist that the greatest “Christmas” gift-giving rigmarole will take place. When God’s prophets are slaughtered: “those who dwell on the earth will rejoice over them and make merry and exchange presents.” (Revelation 11:10).

In England, as the bible became commonly available under King James in 1611, people became aware that the rites of Christmas are anathema to scripture. In 1644, the British Parliament declared Christmas to be unlawful and abolished it. The Puritans of New England, USA also banned the observance of Christmas by law in 1659, classifying it the works of Satan: “heathen, papist idolatry.”

A statute of the Court of Massachusetts read: “Whosoever shall be found observing any such day as Christmas, or in any other way … shall be subject to a fine of 5 shillings.” The law’s preamble explained its purpose was “for preventing disorders … (by) observing such festivals as were superstitiously kept in other countries to the great dishonor of God and the offense of others.”

But the commercial impetus ensured Christmas could ultimately not be stopped. Merchants report regularly that over 60% of their annual retail sales occur during the Christmas season. Thus, in “The Plain Truth about Christmas,” Herbert Armstrong says: “A gullible people has become so inoculated, many take offense when told the truth. But the ‘Christmas spirit’ is created each year, not to honor Christ, but to sell merchandise!”

There is only one righteous thing for believers to do with pagan Christian holidays, and that is to repudiate them: “Take no part in the unfruitful works of darkness, but instead expose them.” (Ephesians 5:11).
(CONCLUDED)