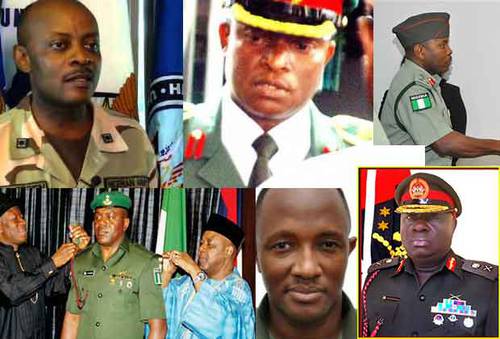 The retirement of senior officers of the Nigerian Army announced on Friday by the military high command, is generating massive controversy, as affected officers are accusing the military authorities of sectional and political bias.

Speaking with SaharaReporters on the condition of anonymity, many of the affected officers claimed that their premature retirement from the military was a result of sectional and political considerations  rather than involvement in corruption and partisan politics. The Army, in a widely circulated press statement, had attributed the retirement of the officers to involvement in corruption and political partisanship.

But a sentence in the statement -“People should therefore  not read this out of context”-advising the public against reading meanings into the retirement exercise,  suggested that the process had been less than wholesome.

A list obtained by SaharaReporters showed that a large percentage of the affected officers hail from the southern parts of the country. The list included a former Aide De Camp to former President Goodluck Jonathan, and several high ranking military officers that worked with his predecessor, late President Umar Yar’adua.

In extensive interviews with some of the officers,  they said they believed they were targeted because of their ethnicity and their perceived affiliation to the Peoples Democratic Party and former President Goodluck Jonathan. At least, three Major-Generals from the South-South geo-political zone were reportedly retired.  Major-General Letam Wiwa, a younger brother of the late environmental rights activist, Ken Saro-Wiwa, was retired. However, there is no evidence that he was ever investigated for corruption, Col. Tonye Minimah, a younger brother of the former Chief of Army Staff, Lieutenant-General Kenneth Minimah, was also retired.

Lieutenant -Colonel FD Kayode, a military commander who served in Gombe State, the only Northern state in which the PDP won overwhelmingly in last year’s general elections,  was reportedly retired on the suspicion that he aided in the rigging of the election in favour of the PDP. Also retired is the former Aide-de-Camp to former President Umaru Yar’Adua, Brigadier-General Mustapha Onoyiveta, a Delta State indigene.

Military sources told SaharaReporters that the list of officers for compulsory retirement was compiled by the office of the National Security Adviser, which, on Friday,  passed it to the Minister of Defence, Major General Dan Ali (rtd). Ali then summoned the heads of Navy, Airforce and the Army to serve them a list of officers to be retired from each of the services.

Many affected officers said they were never involved in corruption or election matters and attributed their retirement to a desire by the government to “cleanse” the military of some officers perceived to be politically powerful. They opined that with three major internal security crises currently plaguing the country, the sack of hugely experienced military officers is to the disadvantage of the country.

A list of some of the officers compulsorily retired on Friday