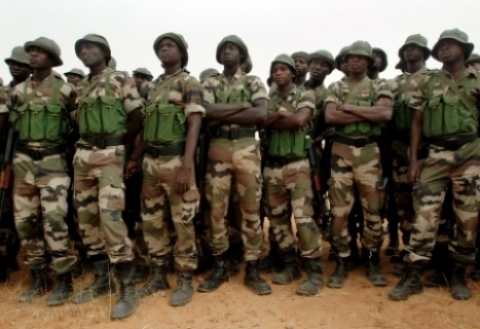 Angry soldiers Thursday prevented the Ag General Officer Commanding (GOC) of 7 Division, Maiduguri,  Brigadier-General Victor Eziegwu in a remote Borno village when he went there in a helicopter to address them.

The soldiers who are drawn from 154 and 155 TF Battalions were used to dislodge Boko Haram terrorists who were occupying Alagarno, a remote Borno town and were allegedly left there without food and water.

A source close to the angry troops said, “Though Alagarno has been taken over by soldiers after a fierce battle with the insurgents, the terrorists planted mines around the town and as I am talking to you now, they have blocked all routes to the village. We have no food and water and the only means to enter Alagarno is by air. No vehicle can go in and out now because of the mines and insurgents surrounding the town.

“Instead of them to use helicopters to supply us water and food as they did when mines were planted along Bama to Banki road and our soldiers were cut off in Banki, the GOC used a helicopter to come and address us over irrelevant issues and warning us unnecessarily rather than address issues bordering on our welfare.

“When he finished addressing us and was about leaving, soldiers blocked the helicopter and forced the pilot to come out of it. So many things happened in between before he was able to leave much later. I do not know if serious damage was done on the helicopter,” the source said.

Responding to a text message sent to him seeking for confirmation on the story, Deputy Director, Army Public Relation of 7 Division, Maiduguri, Col Mustapha Anka said he does not have details as he did not receive any official briefing on the matter.

“It is rumour I have been hearing. We are passing through so many huddles that you did not know because you are not part of us. We really need media cooperation to boost the morale of our troops. That is very essential at this time.

This is a critical moment,” he said.    http://www.dailytrust.com.ng/news/general/angry-soldiers-block-release-goc-over-food-water-shortage/140532.html#pl3sBtgYRTTktVKA.99

The attention of the Nigerian Army was drawn to a news story on the online page of Daily Trust newspaper titled “Angry soldiers Block, Release GOC Over Food, Water Shortage” written by Shehu Abubakar.
While acknowledging that indeed troops that captured the strategic forest of Alagarno, experienced some logistics problem that include water shortage, due to some unforeseen circumstances which is normal in war situation, it is not true that the troops behaved in the manner he stated. If Alagarno is truly inaccessible, how did the gallant troops rout out the Boko Haram terrorists in the forest? The concoction of this story and the release of yet another video by some remnants of Boko Haram terrorists could be more than mere coincidence. Therefore, one begin to wonder what is the motive behind such false story by the reporter.

For the avoidance of doubt, the Acting General Officer Commanding (GOC), 7 Division, Brigadier General VO Ezugwu indeed visited the troops and also supplied water to them. The GOC did not leave the troops as insinuated. Rather, the troops hailed the GOC for his passion and empathic disposition towards the soldiers. As a matter of fact, he actively participated in clearance operations along Bulablin – Alargano axis with the troops and was with them in their defensive location throughout.

Consequently, the Nigerian Army wishes to request the retraction of this story by the paper and also enjoin reporters to always cross check their facts before filing their stories. They should also understand that misinformation by Boko Haram terrorists and their sympathizers greatly assist their evil activities.
The public is urged to disregard the story and continue to support the Nigerian Army in the fight to end terrorism and insurgency in our beloved country.

You are kindly requested to disseminate this rejoinder to the public through your medium.
Thank you for your kind cooperation.