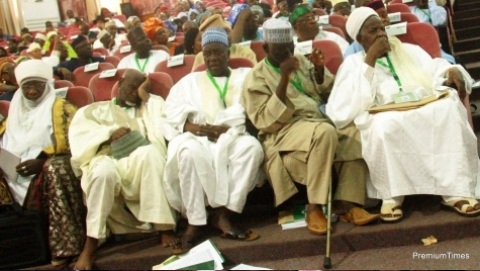 President Goodluck Jonathan has commiserated with members of the Association of Retired Police Officers on the death of one of their representatives at the ongoing National Conference, Hamman Misau.

in a statement by the Special Adviser to the President on Media and Publicity, Reuben Abati, Mr. Jonathan also extended condolences to Mr. Misau’s family, the government and people of Bauchi State, the Chairman of the National Conference, Idris Kutigi, and all of the deceased’s co-delegates.

“The President joins them in mourning Hamman Misau who patriotically served his nation, state and community throughout his 34 years of distinguished service in the Nigeria Police Force and even in retirement, continued to be actively engaged with efforts to move the nation forward as shown by his participation in the National Conference.

“As he is laid to rest in his home state today, President Jonathan urges all delegates to the National Conference to resolve to honour his memory by rededicating themselves to working conscientiously towards further strengthening national unity, and promoting peace, security, political stability and faster development in the country.