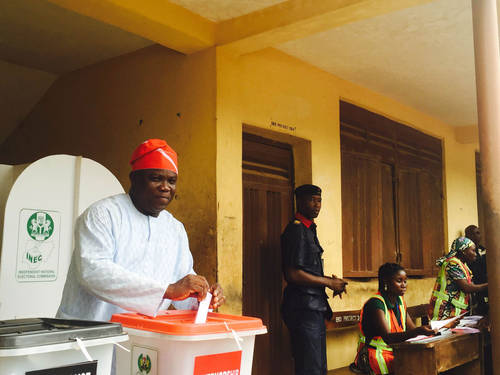 A civil society organisation, Save Lagos Group has accused Lagos State Government of deliberate neglect of some communities in Ikorodu Division of the state in the area of infrastructural development.

In a statement issued by the Convener, Comrade Adeniyi A. Sulaiman and the Director, Media and Strategy, Comrade Olaolu Oladipo on Wednesday, the called on the state governor, Mr. Akinwunmi Ambode to right years of wrongs that have been to done to areas being an important part of his constituency.

The Save Lagos Group listed the communities in the Ikorodu Division of the state as including Igbogbo, Awesu, Orere-Abosan, Offin, Oreta, Bayeku, Ipakodo, Adamo, Araromi and others.

According to the Save Lagos Group, the physical presence of the state government in terms of water, roads, electricity and security barely exist for the people living in the areas to enjoy as part of dividends of democracy to accrue to them.

“A visit to these areas will reveal that the presence of government, especially the state  government barely exists. The roads are barely passable during dry season and are even worse during the raining season when virtually all the communities are cut off from the rest of the state.

“Most of the houses in the communities don’t enjoy pipe borne water for the inhabitants to drink. There are no schools for the kids living in many of these communities and where they (the schools) exist, they are living on the benevolence of the parents who usually provides materials for the schools to function with.” The statement reads.

On the area of security, the Save Lagos Group wrote that the presence of security agents are none existent as the people have been left to fend for their security needs by engaging local vigilance group ‘Onyabo’.

“Recently, a prominent medical doctor, Dr. Oguntoye Babatunde Makanjuola was killed in cold by people suspected to be hired assassins in Awesu/Orere-Abosan estate with little or no clue regarding whether the police have commenced investigations into the murder or not. What we were told was that the police found it difficult to make their way into the estate.” The statement reads.

Save Lagos Group wrote that the murder forms one of the numerous murder of people in the areas that have remained unmentioned in the mainstream media owing to the fact that the areas have been cut off from the rest of the state.

Added to this is the issue of continued cult clashes in the area, which are daily witnessed by the people, saying, “The people of the area live in constant fear over the activities of these cult groups who usually use lethal weapon to outdo one another.”

The group stated that the communities are also at the mercy of land grabbers who call themselves ‘omo onile or omo adugbo’ who from time to time cause a breach of the peace in the areas.

“We are therefore calling on the state governor to borrow a leaf from the activities of his immediate past predecessor, Babatunde Raji Fashola who tried very hard to develop his immediate constituency (i.e Lagos Central). We are therefore calling on you to see the entire Lagos East district as your constituent by bringing the much needed development to the area.” The statement concluded.