The Kaduna State Government (KDSG) has dragged Dr John Danfulani to a State High Court on allegation that he made “an inciting” social media update on 28th December 2015. KDSG isn’t appealing the decision of the Chief Magistrate that sat on the same allegations where Dr John Danfulani came out victorious, but the state govt is tabling same allegations (as a fresh case) in the High Court.

The renowned Political Activist was on Wednesday morning (10am of 26/10/2016) arranged before a High Court Judge in Suite B4 High Court 14 Ibrahim Taiwo Road, Kaduna.

Dr Danfulani, a former lecturer in the department of political science Kaduna State University, had won at a lower court when charged by Kaduna State Government over a Facebook post criticizing the Mal-administration of Governor Nasir El-rufai’s leadership style in Kaduna state.

He was earlier arraigned in January 2016 before a Magistrate Court by the State’s Commissioner of Police. He spent six days in prison before his bail application could be heard in the case which was later struck out for no locus standi upon hearing.

On Wednesday 26/10/2016, the Kaduna State Ministry of Justice filed a fresh case against him at the State High Court, before Justice Bilkisu Mohammed.

In the ‘Notice to Prefer a Charge’, signed by both Bayero Dari and Abdullahi Isiaka for the Ministry of Justice, the state said that the alleged criminal charges against Dr. John Danfulani falls under section 417 and 418 of the Penal Code Law.

They went ahead to state that the alleged Facebook post he made on 28th December 2015  where he talked about fuel scarcity,  high  foreign exchange and a high number of out of school children in the north, sought to excite hatred and contempt against the people of Nigeria.

When the case came up for hearing today, Dr. Danfulani, pleaded not guilty when the charges were read to him. But the Judge said he should be remanded in prison till the 7th of November, 2016 when she will be back from a ‘seminar’ to listen to the bail application.

But Dr. Danfulani who spoke to newsmen at the court premises before being taken to prison said he is being persecuted for simply criticizing the activities of both the state and federal government. He added that the constitution of the federal government gives him the right to freely express his opinion on issues of governance that he is not comfortable with.

The bail application comes up for hearing on 7th November 2016.

Of note, Dr. Danfulani has been critical of the Zaria massacre and secret mass burial of hundreds by the El-rufai government and military in Kaduna, and recently been vocal on twitter about the continued persecution of Kaduna’s Shiite minority and the killing and incarceration of Shia Muslims in the past weeks across some northern states. 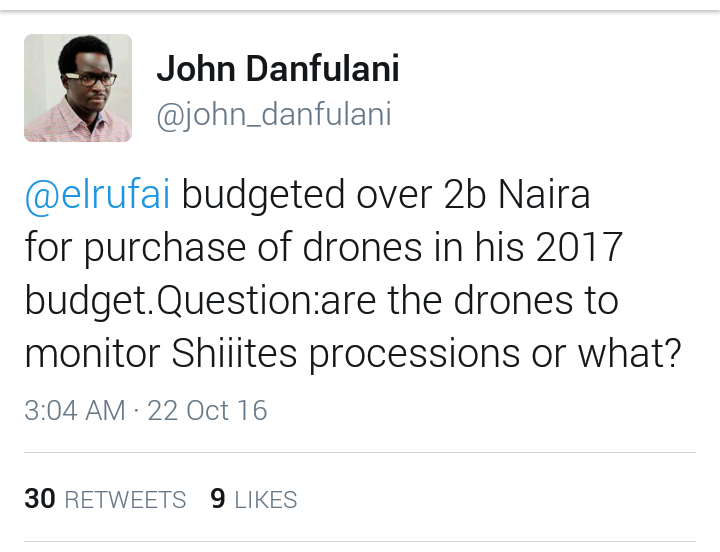 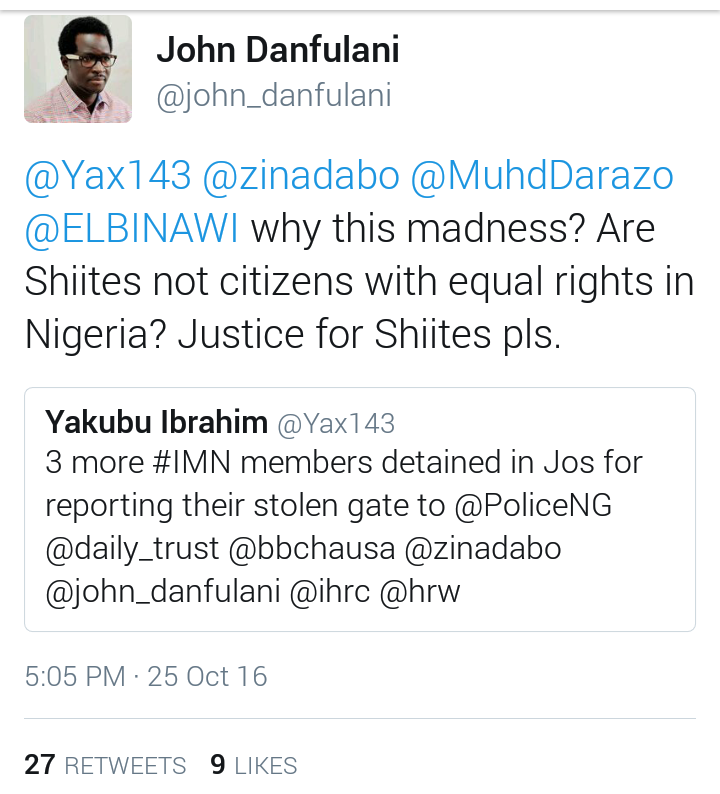 Kaduna governor el -Rufai is renowned for his loud and no holds barred criticism of past administrations when he was not appointed. He was recently chastised by Nigeria’s largest Muslim group leader, sheikh Dahiru Bauchi who comforted the citizenry that the governor only has a little over two more years within which to ban and oppress.